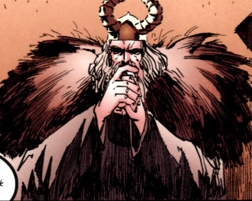 The mythological figure known as Zeus remained the ruler over the realm of Olympus and was part of the Elder God collective that formed the AllGod manifestation. When he learned that Herakles had been maimed on a mission to Earth, Zeus sent an army to retrieve his beloved son. Whilst this force was away, a team of heroes caused the planet of Godworld to explode which left thousands of Gods homeless. Zeus was punished by his fellow Elder Gods and banned from contact with Herakles for a thousand years. When AllGod single-handedly ended the global invasion of Earth by the Tyrrus Combine, his efforts left him incredibly weak. Not knowing if he was a friend or foe, the air foce killed AllGod which in turn eradicated all of the Elder Gods, Zeus amongst them.