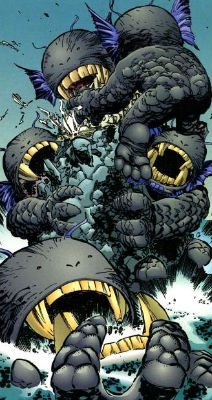 Dragon was assaulted by BrainiApe whose psionic abilities enabled him to enslave various beings, one of which was a giant sea monster. This creature had been living in Lake Michigan and it ate up Dragon and his ally, Hellboy, leaving the duo to fight their way out of the monster’s colon after it was killed by the air force.

The monsters were actually a race known as the Grokk which answered the calls of the Atlantean due a command horn. They were used to eject the Gods from Atlantis when they claimed the city as their new home. The Grokk also were ordered to dig tunnels that linked all bodies of water around the globe to one another. This act endangered the world and Mako killed him to save the planet. The Grokk later were utilised by the Monster Master to battle against the Gods and the Liberty League.

The Grokk next appear during The Tyrrus Combine attack on earth. They are lead under Mako who has killed Atlantean leader Garf. Many of the Grokk are massacred, but many go down fighting.