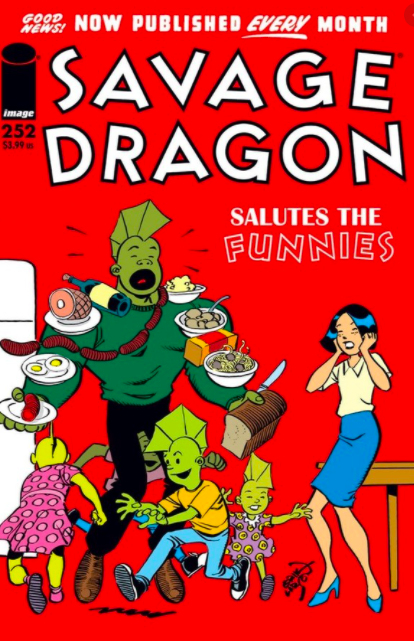 Maddy’s birthday arrives and with her turning another year older her interest in school seems to be growing, or at least not being able to join in with her siblings. The Dragon children are enjoying home-schooling and Maddy wishes to be part of it all. When she is finally allowed to join her brothers and sister it is not too long before she falls asleep.

The lockdown due to COVID has had other affects as Alex Wilde points out to her roommate. Angel Murphy has put on a bit of weight due to all of the inactivity recently but is adamant that she can still fit into her costume. It turns out she can but the realization now hits hard that she has indeed gained some weight. Angel wishes she could get out to see her fiancé Frank Darling but also now thinks she should lose some weight so she can fit into her wedding gown.

Meanwhile, Paul Dragon has managed to get into the United States and pays a visit to see William Jonson, hoping to connect with people from his past. Paul talks about how in his reality that William and he used to share the same body until the wizard Fon~Ti separated them so they could pursue their own lives. William has no real recollection as the memories he retains from Paul’s reality are quite fuzzy. Paul wonders if he can make contact with Star and Rita points out that her husband also used to use that guise on this reality.

Maxine goes to visit her dentist, Rex Melvin, to finally have her braces removed. He is obviously a big fan of her viral videos and makes a number of inappropriate comments and suggestions to Maxine. Rex is ultimately caught out by his wife and gets struck down by the enraged woman. The Dragon kids settle down to play a video game but argue over whose turn it is. Their fun is ruined when their parents join them in the room and play the game themselves.

The members of Freak Force remain on lockdown on Barbaric’s tribe’s reservation where the team continues to train together. Barbaric is visited by his uncle who jokes around with his nephew but ultimately asks that Freak Force try to keep the volume down when they use their powers. Frank Darling attends a Black Lives Matter protest whilst at work and joins them in taking a knee. This act incenses racist cop Dick Tasty who proceeds to violent assault his colleague. The Supreme Court overturns the ban on aliens in the United States.

Malcolm is sent out to get some milk and ends up witnessing a fight between two customers at the store. He ends up getting into a fight with the victor and defeats this foe before returning home without the milk and needing to go back out. Amy befriends a humanoid tiger named Walter and the pair get into a fight before being disturbed by Maxine. The tiger flees the scene and a terrified Maxine demands some answers from her daughter. Malcolm cannot get to sleep due a party going on in a nearby apartment and goes to ask them to keep the noise down. He ends up joining the fun but is soon dragged back home to bed by Maxine.

In Pyrite Gorge, Arizona back on Earth, a privately funded deep space monitoring station called Distant Encounters detects a strange energy surge approaching them. Zakorra emerges on the scene after the equipment there became linked to him and through him to Powerhouse back on Ethra. Two of the men in the command centre are killed by Zakorra who had mistaken them for his foes back home before he realizes that not only is he not fighting his enemies but is not even on his own home planet. The confused alien warrior takes to the skies to explore this alien landscape and it is not long before he comes under fire by the local law enforcement. Sheriff Escobar shoots at this alien invader but when one of his bullets is caught and Zakorra understands that he meant him harm, he picks up the fleeing sheriff’s vehicle and hurls it to a fiery, explosive end.

Zakorra desires to drain the energies from Powerhouse on Ethra to his new version on Earth to transform this new planet into one of his own to rule over. Meanwhile back on Ethra, Lord Amalak and his allies perform numerous tests on Powerhouse and confirm that its energies are being siphoned off elsewhere. Ethrian offers to trace the source of this drain so that he may finally rid them of the threat of Zakorra. A portal to Earth is then opened up and Ethrian passes through with the Keeper Krell who will be the means for him to return home…