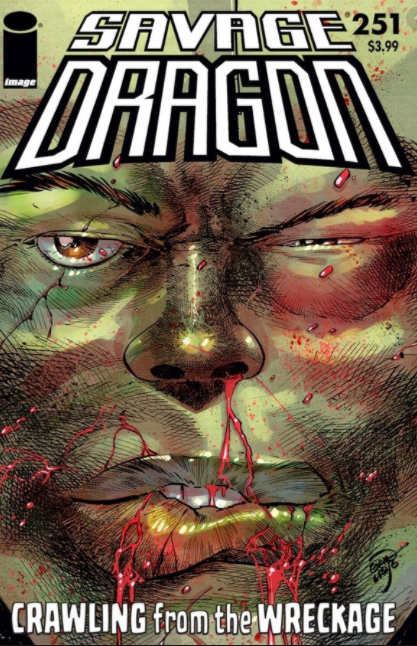 Malcolm immediately calls in to question the identity of his surprise visitor, pointing out to Paul Dragon that his fin is wrong. His father is dead and he does not for an instant believe that Paul is his parent back from the dead. Paul explains that due to the margining of all of multiverse that he now has access to Dragon’s memories and is now essentially a recreation of Malcolm’s dad. He requests to go into Malcolm’s apartment to talk it all out but his status as a stranger and the current pandemic gets an instant rejection.

This leads to Paul revealing that Malcolm did not even exist in his own reality. He asks for the addresses of Crusader, Destroyer and Battle Girl as they were indeed his children on his world but when he emerged from Dimension-X he met up with Captain Tootsie and was given Malcolm’s address. Paul assures Malcolm that although he did not exist in his world he did exist in large amounts of realities that he now has memories of and he thinks of him as his own son now.

Having hoped to be sleeping with her husband by now, a naked Maxine partially emerges from her bedroom to see what is keeping Malcolm. Paul introduces himself and how he came to be on this Earth. He then departs to check in with his other children and first pays a visit to Angel but first is reunited with Alex. She emotionally embraces Paul as she is still very much in love with Dragon and mourning his death.

Paul and Angel are reunited and she realizes that it is his existence that caused her mother to start referring to Dragon as “Paul” after the merging. He picks up a photograph of Jennifer Murphy in her superhero costume. Although Paul is not familiar with that costume he notes how Jennifer’s face is burned into his memory, although she was named Susan Wilson where he hailed from. Angel reveals that Jennifer died awhile back in Dimension-X.

Meanwhile, Dart is briefed on the return of Dragon in the form of Paul. Samurai explains how this man is not exactly their old enemy but rather a survivor of the multiverse merging and that he recently arrived on Earth through a portal to Dimension-X at Genetech. Dart is not in any way bothered by the arrival of Paul and notes that he is pushing sixty years of age and was not much a problem during their last encounter 11 years ago.

Malcolm entertains his children with a game of chutes and ladders whilst he asks Maxine her advice about whether he should go to confront Dart. With the arrival of the Vicious Circle and their recent assault upon their apartment it seems likely that Dart will leave them alone now. Malcolm wonders if he should make the first move but Maxine distracts him by dragging him into the bedroom, much to the annoyance of her kids whose game she has abruptly ended.

After sleeping together, Alex is relieved that Paul is still in her bed and that she did not dream the whole thing or that he had left. Paul admits that they had never met before in his reality and that he was never even a police officer there. He is not the Dragon that Alex knew but she is unfazed and is relieved to keep a hold of any version of the man she loves that she can.

In an effort to figure out their possible relationship, Malcolm goes to meet Paul in a park. Paul explains how his reality was erased from existence when the multiverse was merged and that the only reason he survived it was due to being in Dimension-X. He had gone into that dangerous realm in search of Susan, his late wife, hoping to be reunited with another version there. Paul’s reality seems to have converged at a certain point and then went along similar paths up until his world was lost.

Paul never awoke in a burning field but instead came online when a version of him and William Jonson became merged. He eventually gained control of that body and had the wizard Fon~Ti separate them so they could pursue their own respective lives. Angel was the biological child of Paul and Susan but was actually younger than Crusader and Destroyer on Paul’s world. Paul considers that reading Malcolm’s comic series may catch him up on a lot of things that are still unclear to him.

This conversation is suddenly ended when Paul finds his body under the influence of someone else and he is forced to attack Malcolm. Paul brutally assaults the unprepared Malcolm who is eventually ordered to leap away to safety. Once Malcolm has departed, Paul calls out the villain responsible as he had suspected MindWarp to be the culprit. Paul is then ordered to pummel himself with his own fists and is soon a bloodied mess. All of a sudden Malcolm returns and lands on MindWarp’s head before stepping on the villain’s brain to ensure that he is dead. With the threat now ended, Malcolm takes note of how powerful a punch Paul has and is told that he has no idea of how right he is.

On the alien planet of Ethra, the renegade Zakkora breaks with ancient law and tradition by taking a second Power Lens for himself to double his already impressive might. This act spurs the planet’s premiere defender, Ethrian, into action to confront his old rival. Ethrian does his best to bring down Zakkora but his own power levels are half of his opponent’s. As the pair continues their battle within the Powerhouse structure, the devastation it causes makes everyone nearby aware.

The Power Staff-wielding Lord Amalak leads his loyal friends and allies in to investigate and it is not long before the horror of the situation sets in. Zakkora has now donned a third Power Lens into his possession, it having broken loose from Powerhouse during the battle with Ethrian. He then closes in on his fourth power source. Despite being outclassed in power, Ethrian is assisted by his arriving friends. Gonn suffers internal injuries but ignores Lord Amalak’s pleas for him to avoid further violence.

It is not long before Zakkora is finally defeated by his assembles foes but he vanishes in an energy burst and is assumed to have been destroyed. It seems though that Zakorra has escaped with his own Power Lens though and is still on the loose. Ethrian vows to track down and bring in the renegade no matter where this hunt may lead him…