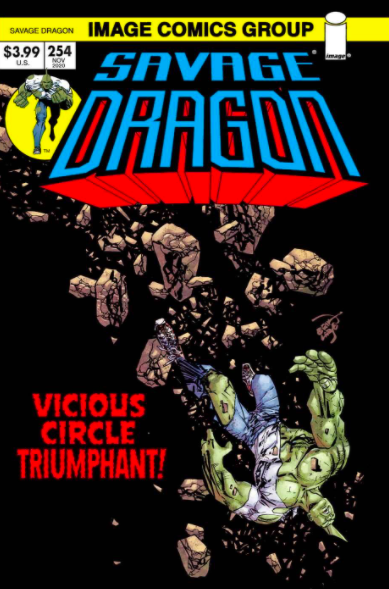 The Crusader
The Destroyer

A shadowed superhero stalks sewer tunnels where a group of the Vicious Circle carry out their latest assignment. Roughneck makes an unwanted sexual advance on Samurai which prompts her to strike out at him. Their brief conflict is interrupted when they hear the hero stalking them trying to make his escape. Samurai dispatches some of her group after this opponent after he is sent running for his life after being punched by Roughneck.

Amy asks if she can marry Walter but her mother tries to explain that that would not be possible as she is only five years old and that Walter is a tiger-man. Amy points out that Maxine is married to a part-alien but she is still turned down due to her age and the fact that Walter is a science experiment gone awry. They and the boys return home to find Malcolm and Maddy asleep on the couch and so Maxine takes advantage to drawing all over her husband’s face. He wakes up and is angry that she could be so irresponsible as he could have killed her should he have reacted in his sleep and brushed her aside. Maxine and the kids all ignore this bluster and just laugh at the annoyed Malcolm.

The son of Dart walks in on his mother lying in bed with Rogue Warrior and asks if he is his father as he has a fin on his head too, albeit one made of hair. Dart sends Billy awake to check on what Insect is doing. Rogue Warrior wonders if Dart had slept with Dragon or Malcolm in order to have this son before he again makes a comment about taking control. Dart transforms into her shark form and beats down Rogue Warrior, revealing that a bite from Mako is what caused her to change and that she would say no more about the birth of Billy.

Paul Dragon continues to speak with people he knew in his own now lost reality and this time spends some time with the Jonson twins. He is frustrated that they barely have any memories of him as their creation on this Earth was different and Paul was not their actual father. This seems to make them different to the Crusader and Destroyer that Paul knew. They do not really feel a connection to him and certainly not one to accept him as their father, William and Rita are firmly their parents.

The Vicious Circle carry out a ruthless massacre as Dart leads her minions to slaughter a large gathering of mobsters. This act of barbarism soon causes the police to spring into action but they put a call in to Malcolm first for assistance. Malcolm runs off to aid the police and ignores Maxine as she tries to remind him that he still has her drawings all over his face.

Back in Chicago, Frank Darling finally returns home following his assault and is accompanied by Angel Murphy. They are greeted by an excited Laila who is told that she will soon be able to start calling Angel her new mom. Mildred joins with them to talk about the wedding plans but it has become a bit of a problem to plan due to the COVID pandemic.

Malcolm bursts onto the scene to deal with the Vicious Circle members that had carried out the gangland massacre, accompanied by a number of police officers. His allies are all slaughtered by the flame-spewing cranial tentacles of Hellfire. Malcolm manages to take some of Dart’s explosive darts and takes down Rogue Warrior before his lightning abilities disable Warrior and Wrath. He starts to feel confidence but Hellfire blasts him, distracting him long enough for Dart’s weapons to leave him a shattered and charred mess beneath her feet…

Vanguard and Wally inspect the satellite where their long-time enemy Modem has now been locked up inside for years. The device appears to have been completely fried and although it is full of energy, none of that seems to be coming directly from the satellite. Instead, there seems to be otherdimensional energy flowing from a portal within the satellite which is being beamed down to Earth for some reason. In an effort to learn more, Vanguard has his companion teleport him down to the source of the energy drain and arrives above Powerhouse. He witnesses the murderous rampage of Zakorra and immediately attacks the villain. He seems to hold his own for now but the extraordinary power levels of the various lenses possessed by Zakorra soon given him an advantage. Meanwhile, Wally discovers that Modem is still within the satellite and once more attempts to use her abilities to possess the robot. Wally is able to resist and when Modem’s signal is once again stuck inside the satellite, he teleports down to check on Vanguard. Wally witnesses his best friend crash down to the ground after an assault by Zakorra as they prepare for the next attack…

Ramona and Robbie in Card Collectin’ by Aaron Eppy