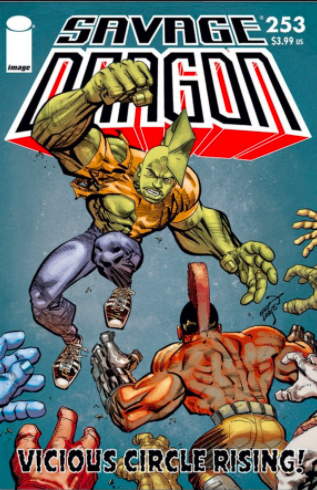 Amy is woken up by noise coming from the alley down below her bedroom and leaps down there to try and get some peace. She finds Walter going through the trash and demands that he respect her need to sleep and be quiet. Walter explains that he cannot loot the abandoned food during the day because the general public would be terrified of him and so he can only come out at night to forage. Amy feels bad for shouting at her friend and invites him to her birthday party where he can have cake.

At a Toronto shipyard, Malcolm Dragon leaps into battle against members of the Vicious Circle, there to steal something. He holds his own momentarily against the group but after sending Insect tearing through Rag Doll and using Wrath to strike down Fountainhead, Rogue Warrior strikes out at the hero and ends up knocking him unconscious. Malcolm eventually wakes up and talks to the local police and suggests that he gets some help. The Vicious Circle outnumbers him by a huge amount and most of his allies have returned to the United States. He wonders if they can ask the S.O.S. to come up and deal with America’s former problem or perhaps they bring in the Canadian superhero team, North Force.

Malcolm is interviewed by the media and it is there that he makes it clear that he will be voting for Joe Biden and Kamala Harris in the upcoming Presidential election. Meanwhile, Maxine checks in with Angel and is surprised that Angel has to be in quarantine in the United States due to coming from Canada when it’s the USA that is struggling to deal with COVID. Angel has taken advantage of her time though and been to check in on Frank after his recent assault and sees him recovering in hospital.

The Dragon kids are allowed to now go back to school but Maxine has opted to keep them home for the time being as she is still vulnerable. As he continues to try and form some connections in this new reality, Paul Dragon goes to see an old friend, Joseph Strange the Bionic Man. In his own reality, Strange fought alongside he and Star but here he never got caught in an explosion and needed to be rebuilt as a cyborg. On this world, Strange assisted in the rebuilding of SuperPatriot after his mauling at the hands of Mako. He apologizes to Paul for not really being able to help him. The birthday party for the triplets arrives and when Thunder-Head and Mei join the Dragons, Maxine immediately begins to torment them over their porno tape. She mocks them and makes them feel uncomfortable until finally Mei snaps and argues with her daughter. Thunder-Head interrupts their fight to wonder where all the kids have gone. They find Julia and all of the Dragon children riding around on Walter in their bedroom. Malcolm arrives home to witness this all and Walter tries to calm things and wonders when he will get the cake he was promised.

Rogue Warrior delivers his report that the Vicious Circle successfully intercepted a shipment that Dart had desired. He then begins to wonder out loud why he allows Dart to remain in charge as he is far bigger and stronger than her. Dart warns him that she is far more formidable than he believes and that even if he managed to kill her then the hierarchy of the organization would interject as he is not next in line. Dart mentions that there could be other benefits to Rogue Warrior’s loyalty but before they get to that, they have a city to conquer…

Vanguard sends back a report to his uncle, General Thakka, and the other high-ranking officials within the military of his people. He talks about how there is currently no proof that the Tyrrus Combine have any presence on Earth or even have any knowledge of its existence. He does, however, note that the planet has had many dealings with alien races that are largely unknown to the Kalyptans and that there are representatives of many of these races on Earth. It is also revealed by Vanguard how his initial arrival to monitor Earth was met with violence at the hands of the legendary Supreme. This figure from their past is not the only superhuman on Earth though, far from it in fact. Vanguard describes how there is an ever growing presence of super-powered individuals on Earth and that their existence could prove a threat to any alien race that attempted an invasion.

General Thakka is pleased with the work of his nephew and the Kalyptans are intrigued to see what happens on Earth, albeit with great caution. After he has sent his report, Vanguard takes his girlfriend to Paris, France for a romantic meal where they discuss their respective careers. Vanguard notes how boring his role is but that he is enjoying his time on Earth due to its culture and, more importantly, having Roxanne Wells in his life. Their dinner is cut short when Wally teleports onto the scene to reveal that their old enemy Modem is attempting to escape her long-time prison. Vanguard and Wally teleport away to deal with this threat, stranding Roxanne in a foreign country with no money or passport…