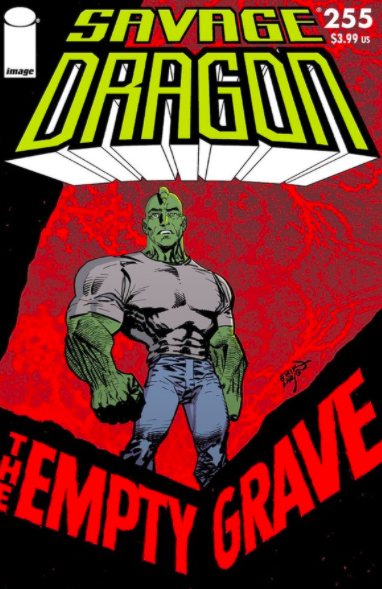 As they sit up in bed together, Paul Dragon reveals to Alex Wilde that he feels a compulsion to see the grave of his dead wife. Alex points out that that would prove problematic on as Jennifer Murphy’s corpse was buried on a planet in Dimension-X. She also notes that Jennifer was not even Paul’s wife but an alternate reality doppelganger. Despite all of that, Paul requires closure and wants to visit the gravesite. Alex reluctantly agrees to take him to see Captain Tootsie at Biotech so they can travel to Dimension-X together.

Angel Murphy laments the fact that she has put on around thirty pounds since the COVID pandemic began and she began sheltering at home. Frank acknowledges that she has not been as active as before since she has been largely unable to fight crime during this crisis. Angel admits that she had not been too active even before that as her recent near death experiences have rattled her. Without Freak Out as a means of saving her, combined with a blood transfusion from Malcolm, she is scared of being seriously harmed or killed. Even though Bellco Chemicals has halted production of Freak Out, Frank suggests that they should look into any remaining supplies that they may have.

Meanwhile, Dart is suddenly shot dead via a sniper bullet through the head. As her lifeless body drops to the ground one of her own explosive darts detonates and destroys her body. The rest of the Vicious Circle present begin to panic and are forced to flee as the local police lob in tear gas at them. The villains fight their way through the police but their growing confidence is then abruptly shattered due to the arrival of Canada’s superhero team, North Force.

The broken and bloody body of Malcolm lies on the ground surrounded by the victims of the Vicious Circle’s assault. His worried wife is then updated on his condition via a telephone call and Maxine collapses to the ground where she is comforted by Tyrone. She goes to see Malcolm in hospital and hopes that he will fully recover, the damage to his brain meaning that there’s a chance of memory loss. Maxine hopes that when Malcolm recovers that they could perhaps move back home to a now-relatively safe Chicago so that he could avoid further incidents like this.

Paul and Alex, wielding the remaining power glove, emerge into Dimension-X through a portal that had been opened up by Captain Tootsie. Alex had expected there to be more resistance to helping from Captain Tootsie but assumes that he has confidence in them both due to their previous experiences in this realm. A monster attacks the pair but they soon fend it off before going in search of the Glum World where Jennifer was buried.

After arriving at Bellco Chemicals in Chicago, Angel and Frank are shocked to discover that the corporation has the corpse of Mako kept preserved in a tank. They worry that Bellco are trying to resurrect Mako but Kazuki assures them that they are merely studying the body. It seems that in addition to the villain’s great power, his immune system was off the charts and they may be able to treat all kinds of diseases by studying him. Kazuki then reveals that Bellco unofficially still have a supply of Freak Out for internal use but he agrees to let Angel have some just this once due to her helping Bellco out in the past.

The now orphaned son of Dart is informed of his mother’s death by Insect who has to explain that Rogue Warrior has been arrested and cannot raise him. Insect then promises the distraught child that she will be there for him. Back in Dimension-X, Paul and Angel find the gravesite of Jennifer all dug up and set out to find more answers. They eventually reach the camp where the Bully-Boys operate out of and are attacked by the savage tribe. The creatures are fended off before Paul sees that Jennifer’s head has been impaled on a pike and the Bully-Boys presumably dug up her corpse to eat. With this grisly discovery made, Paul is eager to head home immediately. As he and Alex make their way they are unaware that they are being watched by a Chosen One child…

Wally excitedly informs Vanguard that Modem is not the cause of their current troubles, seemingly oblivious to the fact that his best friend is currently locked in battle. Wally soon acknowledges the danger as he detects that Zakorra’s power readings are even greater than that of Supreme. The fight is stopped when Zakorra detects a disturbance in his connection to his Powerhouse and he quickly races inside his stronghold to investigate.

Inside the Powerhouse citadel, Ethrian and Krell explore the facility and it is decided by Ethrian that he must be down his rival like a mad dog. The draining of their own Powerhouse puts their planet in peril and Zakorra must be stopped. Krell disagrees with the methods of his companion but is unable to stop him as Ethrian flies off to confront Zakorra. Wally teleports inside and watches on as Krell attempts to disable Powerhouse, only to be tackled to the ground by its guardian, Chuk.

Vanguard has caught up with Zakorra and does his best to bring down the alien warrior but even his most powerful blows seem to have no effect. Zakorra soon grows tired of the contest and moves to dispose of his opponent but is soon struck down. Ethrian has arrived to finally defeat his enemy but when Vanguard tries to help him out, he is sent hurtling to the ground once more by Ethrian, eager to claim victory on his own…