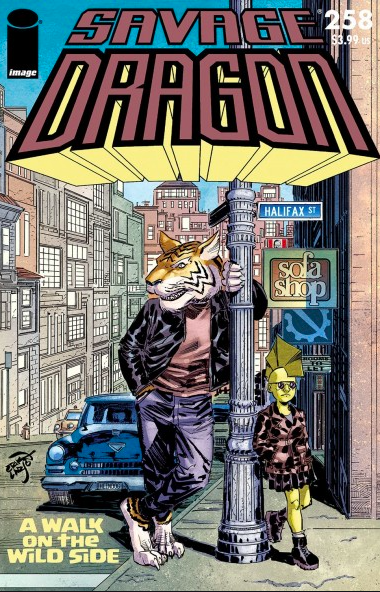 Supercharged with electricity, Malcolm Dragon becomes more powerful than ever before and clobbers Thor as the members of North Force look on in awed silence.

Malcolm, Maxine and their children return home. Maxine is dismissive of their police protection. Amy Dragon wanders into her room only to find Walter the tiger sleeping in her bed.

Amy Dragon dumps Walter out of her bed onto the floor. Walter suggests the two go on an adventure and Amy sneaks into the front room to get her jacket. The girl and the tiger jump out the window into the night and race down the street in the snow. When passersby cause a stir, Walter panics and the two hide on the top of a passing bus, which is headed North.

Back at home, Amy’s parents find that she’s missing and Malcolm is tasked with finding her little girl.

Amy and Walter fall from the bus as they wrestle and it turns and the two find themselves lost in the country. Following the road they wander, cold and hungry. When then they find a pool house with a bucket of KFC clearly visible Amy breaks in and the two go swimming and eat chicken until they’re discovered by the two vacationing podcasters in the adjoining house seeking a late night snack following a viewing of a timeless classic in the TV room. Discovered, the girl and tiger hastily put on their clothes and flee the premises only to be discovered by Grizzly from North Force, who had joined a search party looking for the missing girl.

Amy Dragon is soon reunited with her father.

Amy Dragon meets Walter the tiger who is digging through the trashcans behind her parents’ apartment. She befriends him and says she has some old clothes that he could wear.