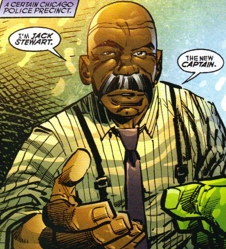 Shortly after Dragon’s precinct was annihilated by members of the Vicious Circle, the authorities attempted to rebuild the force. They suffered a setback when their new captain, Gus Turpin, was killed by Virus. Few people would desire the position of becoming the new captain but Jack Stewart was different.

Captain Stewart dismissed any notion that his new role was a poisoned chalice and relished the opportunity. After Dragon was replaced by Virus and then returned as Emperor Kurr, Stewart began to realize perhaps he made a mistake. Chicago’s troubles increased and Stewart struck up an odd relationship with the new OverLord. The pair began working with one another to clear up the streets of Chicago, targeting renegade Vicious Circle members as well as other threats such as Kurr.

Captain Stewart later pays Angel a visit at her home in hopes of persuading her to join the police force after she graduates high school. The meeting is cut short as he is called in to the location of Gossip Rag where a battle between Malcolm and OverLord is taking place.

He is later seen visiting Malcolm in the hospital as well as celebrating Angel’s 18th birthday simultaneously.

After Dragon defeats the new OverLord, Captain Stewart is the bearer of bad news for Dragon and has to tell Dragon that he is under arrest. He then drives Dragon to jail and when Dragon suggests that he help in the fight aganist Powerhouse, Stewart tell hims no. Stewart is put onto the witness stand in Dragon’s trial and while he defends Dragon to the best of ability, when asked if he would feel safe having Dragon on the force again, he simply states “no”.

He deals with Malcolm Dragon on occasion after Malcolm becomes a bounty hunter. When Zelda is arrested for her part in the abduction of Malcolm Dragon he lets her go as he feels sorry for her situation. He later asks Frank Darling Jr. to continue to try to persuade Malcolm to join the police force when he finishes High School. When President Donald Trump decrees that all aliens leave the US, Stewart comes to arrest Malcolm. However, this turns out to be a ruse, and he helps Malcolm escape to Canada.