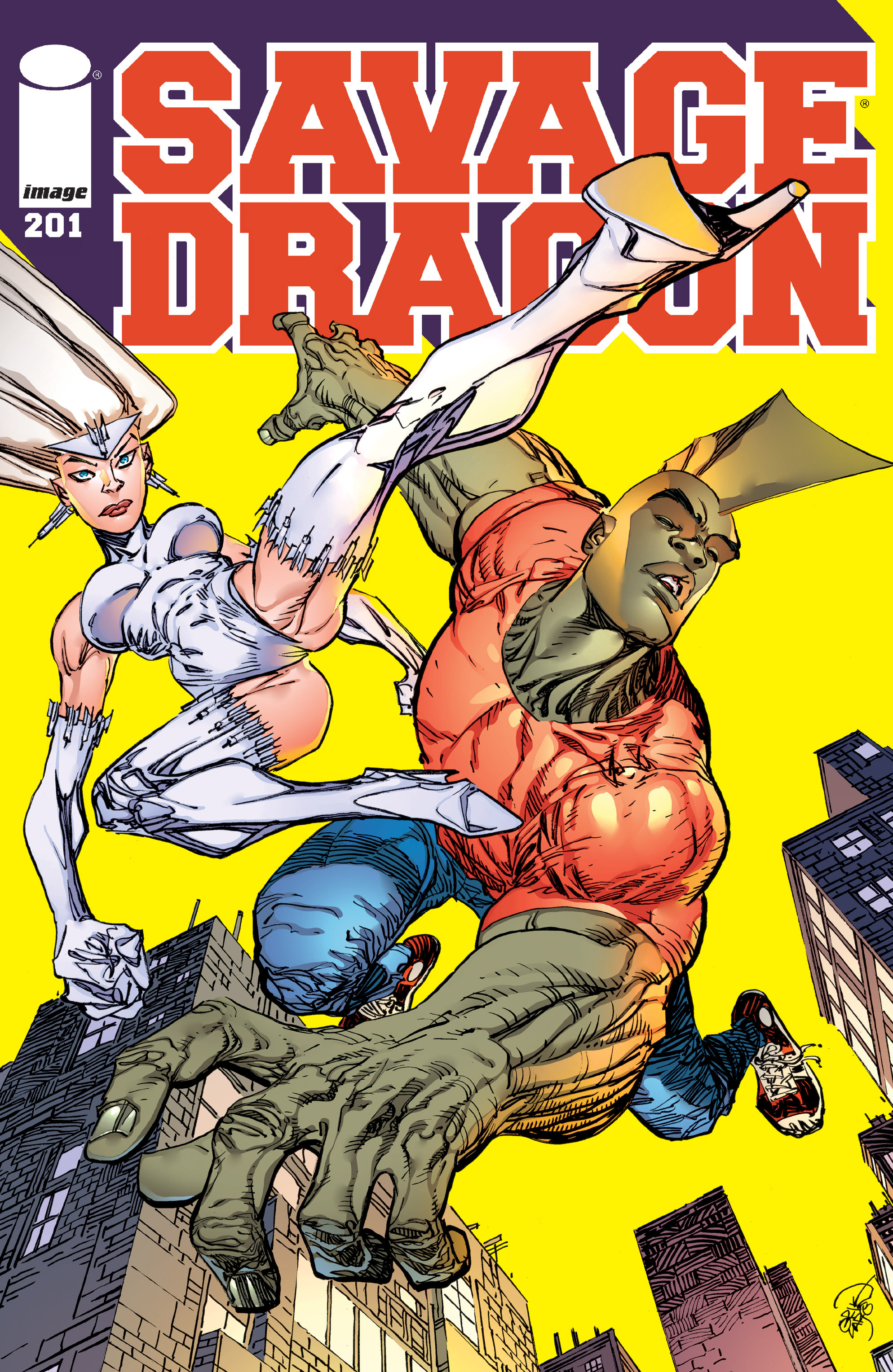 Malcolm Dragon talks with Frank Darling and learns that the young police officer is getting divorced from his wife. It seems that when he began his police academy training that Tierra could not cope with her fear that something would happen to Frank, similar to why she broke up with Malcolm a while back. Tierra has moved out already and their daughter is mostly being cared for now by Frank’s mother. It also seems that Tierra never really got over her love for Malcolm and that caused some friction too.

As the conversation continues, Malcolm reveals that during the alien invasion where Frank and Tierra first slept together that Angel had also attempted to sleep with Malcolm. They then talk about how Angel is now likely dating Daredevil, having been infatuated by the Golden Age hero for many years now. Malcolm and Frank also discuss the early days of sexual relationships and their love for the constant sex.

Daredevil and Battle Girl bring down the last of the Troll army that had invaded the surface world which had been opposed by the Special Operations Strikeforce. Their victory is confirmed by Battle Tank which allows the young heroes to celebrate. They decide to finally act on their mutual attraction and later sleep together. After having sex, Angel Murphy realizes that her feelings for Daredevil were mostly brought on by him in costume. She feels that out of costume that Daredevil loses his appeal and she decides to break things off.

A dishevelled Dart awakens in torn prison outfit with no idea what has happened to her. Meanwhile at a Bellco Chemicals plant, scientists congratulate themselves over their latest successes in genetic experimentation. Melvin Bellco is pleased with these results but the joy is short-lived as Dart arrives with allies, looking to coerce Bellco into working for the Vicious Circle. An alarm is triggered and Dart orders her minions to tear the facility to the ground.

Dart then shocks Malcolm and her fellow villains by transforming into a super-powered form, a derivative of Mako. She had been infected by his bite shortly before Mako’s death and it was these newly gained and unknown powers that Dart was able to escape Stronghold Penitentiary. Malcolm fights the villainess as the other Vicious Circle members present decide to flee, fighting their way through the guards and arriving police.

An explosion tears through the Bellco facility and breaks up the fight between Malcolm and Dart, sending the villain off away from the authorities. Malcolm spent three days buried in snow before awakening to a phone call from Angel. She informs him that she hopes to return to Chicago for Christmas after her breakup with Daredevil. Malcolm arrives back home and hears the shower running and goes to surprise Maxine, stripping off naked and entering the bathroom. He is embarrassed to find Tierra in the shower instead. Maxine quickly intervenes to pull her boyfriend away from the awkward situation and they head to the bedroom.

In the Hall of Science, the resurrected DeathWatch boasts about how Lurch’s body has enabled him to become even more powerful. He vows to return to his home world of Earth and exterminate all life there just as he has on Kalyptus. Vanguard declares that this will not happen and that Lurch will stop him. This claim is laughed off but then DeathWatch starts to feel that his host body is asserting control, transforming back into Lurch’s true form.

It is not too long before DeathWatch’s mind begins to assert control again, his willpower having been proved years ago to be powerful when it overtook the Turellan Questprobe that recreated him. Modem suddenly teleports in with one of the Mekka-Drones, now aware of DeathWatch’s true intentions. They cut off the access to the alien technology of DeathWatch, turning him back into his harmless human form.

Vanguard demands that DeathWatch turn his body back over to Lurch. He begins to pummel him repeatedly until he agrees. The Mekka-Drones prepare to make amends for aiding in the extermination of the Kalyptans by avenging their deaths by killing their murderer. Modem keeps DeathWatch contained as he is to be erased. Vanguard is teleported away alongside Wally and Roxanne Wells as the others sacrifice themselves to end this threat. The trio arrive back on the planet’s surface as the floating cities all explode in unison…