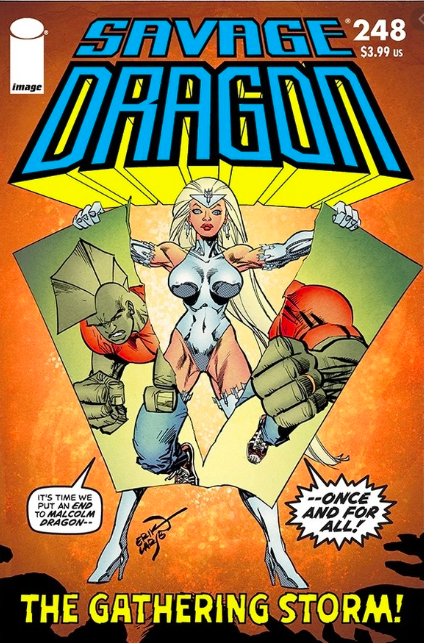 Dart masterminds a mass prison breakout from Stronghold Penitentiary that enables the entire Vicious Circle to break free. She has learned that it is only a matter of time before the authorities will be carpet bombing all of Chicago with Freak Out that will render them all powerless. Some cracks begin to form in their ranks as tension mount, Insect and Samurai come to blows and have to be calmed down by Dart.

The seriousness of Battle Girl’s injuries is discussed with Doctor Figbaum suspecting that she will never regain the ability to walk. Frank made the trip from Chicago to be with Angel and speaks with Alex about life and his love for Angel. Maxine reluctantly sacrifices her supply of Freak Out that she had planned to use to remove Madeline’s electricity powers. A blood transfusion from Malcolm is then administered to heal Angel.

Meanwhile, Dumpling and Blossom get into a fight which is broken up by their father whom they then both walk out on. The pair join up with their friends in the Vicious Circle as they begin their own journey out of the United States. OpenFace Jr. promises to help Waylon Wipple achieve his goal of becoming a super-freak like the rest of them when they arrive in Canada. It is as they flee that the carpet bombing of Chicago takes place. Any remaining super-freaks are reverted to normal which includes the Worm Ring. Blossom and Dumpling hope that their father got out of town safely and are unaware that his negation ended up killing him.

Frank checks up on Angel’s recovery and is shocked by the sight of her transformed with the Chosen One blood. She calms him down before being administered the Freak Out that returns her to normal, prior to a transfusion of her own powered blood to restore her own abilities. A short time later, Frank takes Angel out for dinner where he makes a marriage proposal. He is willing to move to Toronto to restart his life with her. Angel seems somewhat reluctant at first and does not want to cause Mildred any hurt if she be left behind but ultimately accepts.

At home in bed, a drunken Maxine makes a move on her husband but she is soon distracted by movement outside their bedroom window. Malcolm goes to investigate and is surprised by his old friends, the Janey and the Jonson twins. This quartet has all adopted superhero names and costumes now. Mark and Peter explain that when Dragon’s essence had previously inhabited their father’s body when they were conceived that they were affected and superhuman abilities is the result. The group later all go out to deal with some rampaging monsters and fight together side-by-side for the first time.

The Vicious Circle arrives at the border to Canada and rams their buses through the gates before engaging the police and army in conflict. They quickly move into more populated areas so that more deadly attacks cannot be deployed by the armed forces. Malcolm receives a call to ask that he help deal with the situation. Maxine is worried that this could be the event that kills her husband and so they head off to the bedroom to potentially have sex for the last time.