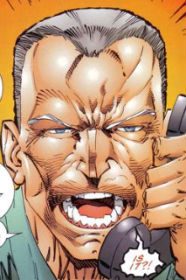 Ralph Jonson murdered his parents at a young age and was enraged to be turned over to the authorities by his younger brother, William. After spending eighteen years in prison, Ralph was released and vowed revenge upon his sibling. William fled from Chicago with his girlfriend Rita Medermade, avoiding assassins for months. When Dragon returned to Chicago, they opted to return home as they felt safer with him back in town.

Using his connections with the Vicious Circle, Ralph abducted Rita and took her to the Lieberheim Embassy in Chicago. He demanded that William bring him ransom money before shooting his brother in the head. Ralph had no idea that Dragon’s essence was occupying William’s body and he took control of the body following the gunshot. Ralph fled to gather weapons but OverLord II emerged from the shadows and killed him.