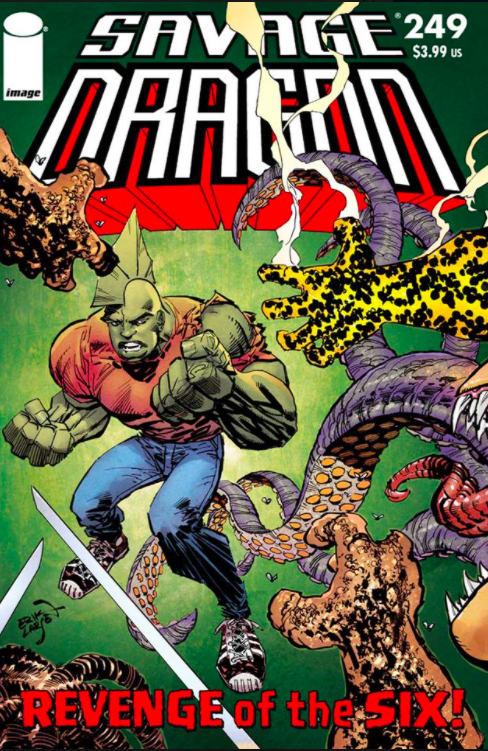 2005. Malcolm Dragon and his old childhood friends are trapped in Dimension-X where they are besieged by an army of monsters. These creatures form out of the ground itself and attack the group but Malcolm defends them long enough to make their escape. Fast forward fifteen years, these youngsters are now all adult and in action against the recently arrived Vicious Circle. Battle Girl remarks that they should all be social distancing due to COVID-19 but these villains are preventing them from staying home.

The heroes take an early advantage but the Sickly’s abilities to absorb the strength of Malcolm allows her to momentarily strike down the hero. She is soon webbed up by one of the female twins as Roughneck mixes it up with Destroyer. Her sibling takes down Frogman as Battle Girl punches out first Mister Faces and then UnderMind. Bear Hands punches out Malcolm before fighting her way through the other heroes and escapes in a car that contains her family.

This fight is broadcasted and Maxine watches on,, cheering her husband on as she cannot bear to live without him or raise their children alone. A news report reveals that Melvin Bellco died when the Freak Out cloud in Chicago negated him. This has prompted his daughter to announce that Bellco Chemicals will no longer produce Freak Out and that they have already destroyed all of their existing stock to prevent further loss of life.

In the Genetech Laboratories West facility, a guard responds to an intruder alarm but is greeted by the sight of a newly empowered Squid Kid. Waylon Wipple revels in his newfound power and tears the poor man into two, his Vicious Circle companions query the need of such brutal force but he dismisses the complaint. The second generation villains decide that it is now time for them to move on to the next stage of their plan.

Meanwhile, the Toronto kingpin of crime is targeted by Dart as she moves to assert her control over the city’s organized crime. She berates the crimelord over his lack of preparation over super-powered rivals and kills all of his bodyguards. Dart then throws her rival out of a building to his death below and assumes control of the city’s criminal element with no further resistance.

Back at the fight outside, Battle Girl and Malcolm combine their might to take out RoadBlock before the remaining Vicious Circle goons are webbed up for the authorities. The villains had claimed that reinforcements had been waiting in the wings to join the fray but this appears to have been a bluff. It is revealed that Wall-Crawler and Web-Slinger being effectively the same person since the Merging of the Multiverse that they enjoy pleasuring one another sexually.

The heroes then part company and all head to their respective homes where Malcolm hears about his wife’s frustration with having to remain in quarantine. She is jealous that he and their children are able to leave the apartment as any infection by COVID-19 would be immediately dealt with by their healing factor. Maxine then reveals that her mother and Thunder-Head have released a sex tape that she has watched multiple times/ Malcolm is not entirely sure why she is so upset as it seems her day has been way more exciting than his due to this viewing.

A teenaged Bobby Berman attends a grand opening on Viking items in the History Museum where he walks around in awe of each display. He is pleased to learn that his crush Jeannie is also in attendance and she talks to Bobby about how Vikings arrived in what would become the United States even before Columbus first sailed there. As the pair walks through the museum a whining little girl named Amy accidentally bumps into Bobby and he shatters a rune stone.

The destruction of this stone causes the ghostly image of Thor to appear to bestow a magical ring upon the champion that has been chosen. Bobby fails to grab hold of the ring and it is instead picked up by Amy and she transforms into the Valkyrie. This super-powered woman then wreaks havoc on the museum before heading outside. She ransacks a local hotdog stand and Mighty Man appears to try and talk her down and into handing over the ring.

When this reasoning fails, Mighty Man goes to collect the girl’s mother and she demands that Amy hand over the ring. Jeannie takes possession of it and is transformed into a new version of the Valkyrie. Amy is taken home which leaves Mighty Man and Valkyrie to talk together. Valkyrie ultimately thanks Mighty Man for his assistance in retrieving the ring and gives him a kiss, causing the embarrassed Bobby to blush in his powered form.