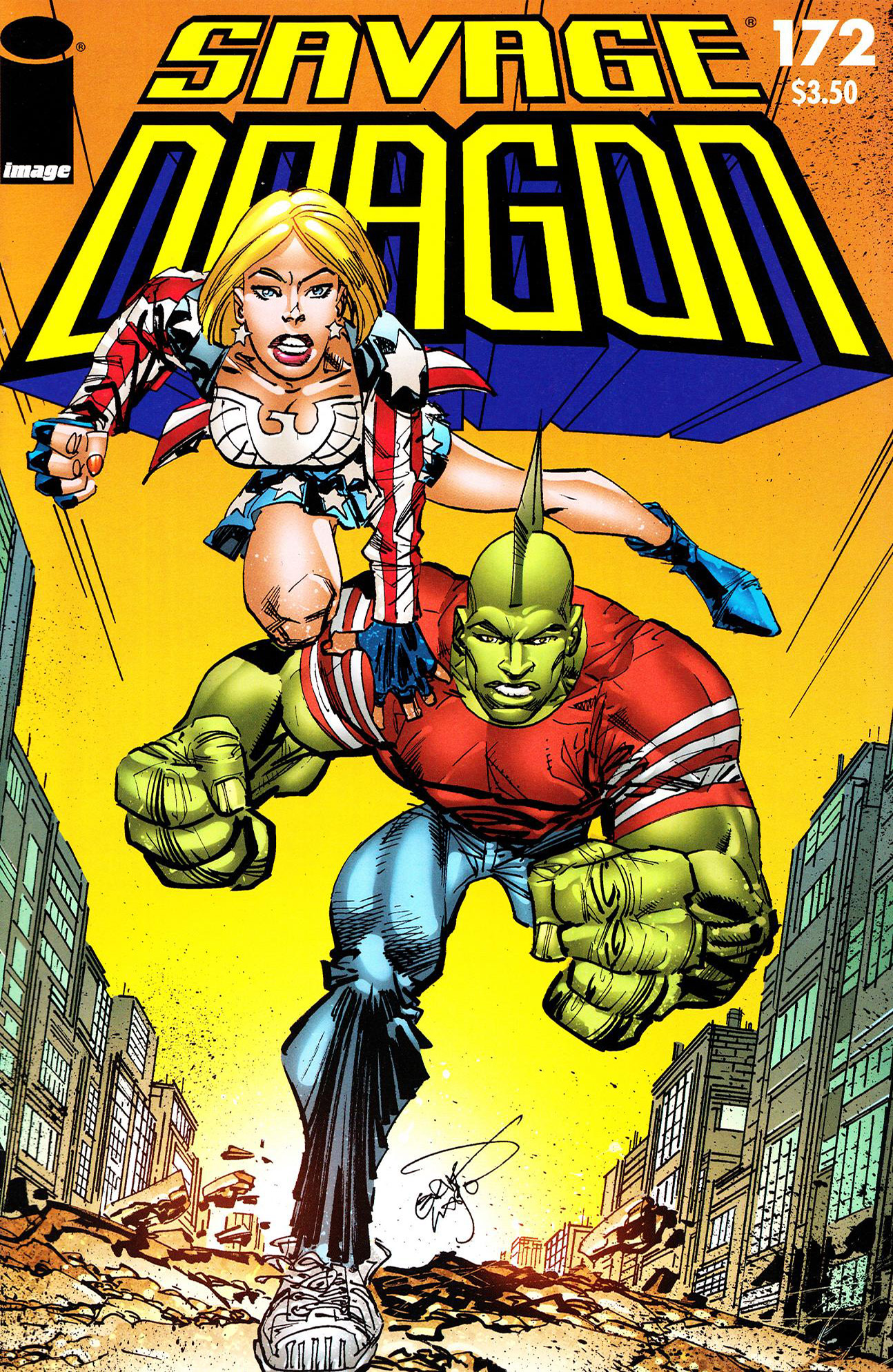 Malcolm and Angel Dragon are caught up in battle against a man called Warren Terror who has declared war on all those that he considers to be enemies to the United States. In his mind, all Muslims all hate their freedom and are seeking to destroy it. Warren has targeted a group of innocent Muslims for death, vowing to eliminate all threats to the country. The two heroes manage to fend off the deluded villain before he can claim any victims and watch on helplessly as his explosive abilities enable him to seemingly fly off to continue his vendetta elsewhere. Malcolm ushers the men that had been Warren’s intended victims and assures them that he has no such ill-feelings towards them.

Meanwhile in Dimension-X, Mister Glum curses his decision to allow WildStar to return unmolested to Earth as he watches him wander aimlessly across Chicago. He had been talked into this act of kindness by Angel Dragon against his better judgment as his superhuman abilities would have made him a useful part of his ever-growing army. Angel points out that WildStar would never have joined in an invasion of Earth which just angers Glum more as he could be a potential opponent when their assault commences. Glum is growing impatient that Earth’s invasion keeps being delayed by Angel as he is confident that the amount of conquered planets now in their empire has given them sufficient resources to achieve his goal.

Back on Earth, Mr. Apples is furious that Principal McGee has selected Malcolm to speak at the graduation of the Eighth Grade. His record as a student in both grades and attendance has been less than stellar and Mr. Apples suspects that the only reason that Malcolm has been given this duty is because of his powers and status as the son of a famous person. The principal points out that Malcolm is incredibly popular amongst his classmates and that the attention his presence there has brought the school has helped Rydell Middle School on many levels. As he departs in anger, a colleague named Buck seeks to clear up the matter regarding Mr. Apples’ feelings towards Malcolm. It seems that Mr. Apples became paralyzed through a football injury, the person responsible for the accident having secretly possessed superhuman powers. Ever since this incident, Mr. Apples has detested jocks in general but Malcolm now in particular.

The Vicious Circle continue to construct their own version of Project: Born Again but WarGod is quick to point out to Thunder-Head that this equipment has limitations. SkullFace had his head reduced to powder when he died and so extra resources will need to be employed. The villains are confident that they can rebuild the Vicious Circle from their own ashes and dismiss OverLord as a threat to them.

Over in Dimension-X, the robotic minions of Rex Dexter have breached the otherdimensional realm in search of their creator. Robot Rex leads his fellow robots into battle against a group of monsters that are holding Rex and his family prisoner.

Mildred Darling makes a fuss over the graduation of Malcolm, something that Angel cannot understand as her brother is simply moving up to High School. Frank Jr. assures her that her own graduation will be made into a big deal too but Angel is not exactly confident. The family arrive at the school for the ceremony where Mr. Apples is still maintaining that allowing Malcolm to speak is a mistake.

A number of familiar faces arrive for the graduation and the Jonson twins are reunited with the two Janeys as their parents enjoy catching up with each other. Pee Wee and Curly are thrilled to finally graduate from Middle School as their time in suspended animation has delayed this event for sixty years. Daredevil is proud of their achievement as he and Scarecrow watch on as the event unfolds.

Malcolm addresses the crowd and dismisses the declaration that he is a hero, pointing out that anyone with amazing powers like him would be doing something similar to him. He instead points to Mr. Apples as a real hero, someone who has overcome huge obstacles to accomplish his goals. Despite losing his ability to walk, Mr. Apples has persevered and now ensures that young men and women get a good education. Malcolm respects his teacher for never allowing him to get by on his name and is proud to have been pushed so that he could graduate under his own merits. After leading an applause for Mr. Apples, Malcolm then speaks with his former maths teacher and is wished good luck for the future when he starts High School.

Angel is approached by Daredevil but she continues to feel uncomfortable around him and instead brushes him off rather rudely without any real explanation. Malcolm is congratulated by Tierra Jones who is thrilled that her boyfriend will now be attending the same high school as her. The couple head out for a walk together but their romantic encounter is interrupted when Warren Terror makes his return. He attacks the young hero and labels him a traitor for defending those that he perceives to be enemies of the state. Malcolm reacts to protect Tierra and defend himself but in the heat of battle, his electrical abilities overwhelm Warren and leave him burnt to a crisp.

Malcolm makes a desperate call to Angel for help and advice but she is busy babysitting Betty Bradford, now equipped with a wrist covering to prevent her becoming Mighty Man again. Angel suggests that Malcolm make a call to Captain Stewart about the incident and assures him that it will not affect his career at school. This incident is similar to when she killed MoreGore recently and that has not caused any problems for her thus far.

Meanwhile, Glum and Angel conquer yet another planet and Glum finally gets his partner to agree to return to Earth. Angel wishes for things to go right should this invasion takes place and once more delays things. She instead pleads with Glum to simply take her back home to get a cheeseburger despite the fact that their army is now formidable enough to truly challenge the forces on Earth. Glum reluctantly agrees to this request and prepares a portal to take them through to Earth… 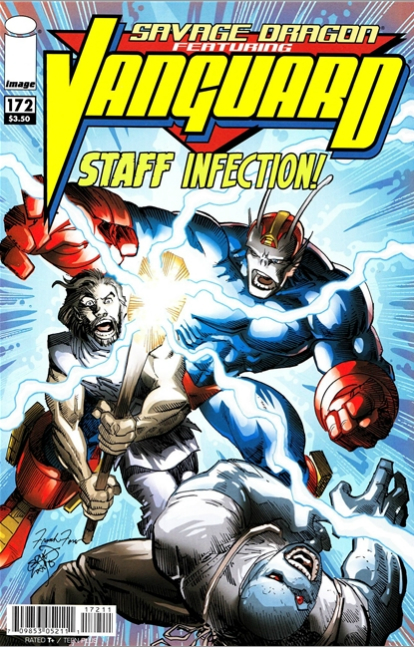 Vanguard teleports down to the Rock House Diner where he congratulates Rock on the rebuilding work that has been done to it since it was destroyed by the Vicious Circle. He then explains that his army has succeeded in defeating the Tyrrus Combine and that their intergalactic war is now over. Widow takes his order of one of everything on the menu. Vanguard has been ordered to return home to Kalyptus and wishes to enjoy every minute of his remaining time on Earth. The revelation that he has to leave Earth has not been taken at all well by his girlfriend, Roxanne Wells.

A news report is broadcast by Roxanne featuring the story of a man who appeared in Lincoln Park, ranting about the super-freak population being abominations. He has begun using his glowing staff to transform freaks back into ordinary humans but as one of the patrons of the diner is affected, he dies from the strain of the process. Rock is the next to be negated, something he is not at all pleased about as he has long-since come to terms with being different.

Vanguard flies over to the park where Roxanne is interviewing Lou Drumm, the man who was once known as the super-villain Mako. He is ecstatic to finally have his life back to normal and dismisses the notion that some people would not appreciate this supposed gift. Vanguard passes them both and confronts the man responsible for this phenomenon who claims to have once been a god that has since been cast out as a mere mortal. Vanguard recognizes him to be Ethrian although it is explained that he no longer possesses the powers of the Ethereal Warrior and is now back to simply being Galian.

As the Janus Staff is employed against Vanguard, Galian cannot understand why he is not affected until it is explained that Vanguard is an alien and that this is his natural state. It is then noted that people have been dying from the process and that all of the vegetation around Galian is dying. Realizing that his gift is actually something of a curse, Galian reverses the affects of his weapon before departing. Vanguard is satisfied by the outcome but the returning Mako is distressed, perhaps his final chance to an ordinary life having been taken away from him.