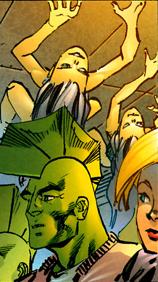 Janey lived underground with her mother and the few surviving members of Rock’s tribe during the reign of CyberFace. These freaks signed up for Dragon’s rebellion, aiding in overthrowing the villain. In the aftermath of this victory, Dragon assisted in getting a real home for Rock and his family. Widow and Rock soon fell in love and got married, raising Janey together. This bliss was momentarily spoiled when Janey was abducted by the Gods due to Radical’s connection to them. Dragon fought to retrieve the child but Herakles assured the girl that she would always have a place amongst them.

In 2008, Janey and her family adopted another Janey from an alternate reality (the reality the Dragon initially resided in). When Universo came to consume the Earth of that reality, Debbie Harris gathered up a few super-powered children to escort to safety. Janey became one of the few survivors of that world as she and her friends were thrown into Dimension-X. These children spent years adrift in this realm until finally reaching the Earth that Dragon now resided upon where the Janey form the original Image Universe was adopted by her family of this new alternate reality. She later moves to moves to Toronto after Chicago is negated and starts a career as a superhero.