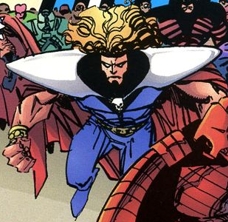 WarGod was amongst a group of Vicious Circle members that were questioning OverLord’s leadership when he was then attacked by FirePower. He then took part in the Gang War and ultimately swore his allegiance to CyberFace. WarGod was later one of the dozens of villains that were shrunk down by a Martian weapon for a couple of years.

Several years passed and WarGod remained a loyal member of the Vicious Circle. He was one of those villains that were incarcerated by the Billy Berman Mighty Man in his own prison. WarGod was later dispatched by the new OverLord to raid Hillman Hospital to steal a unit of Dragon’s blood.

WarGod later welcomes Kevin Gorelick to the Vicious Circle and gives him the code name Thunder-Head. WarGod decides to include Thunder-Head on his plan of resurrecting fallen Vicious Circle members by building a machine using parts of Project: Born Again. They decide to start with bringing back Thunder-Heads father first, Skullface. After finally building the machine, WarGod activates it upon Skullface’s grave. However, Malcolm and Angel interrupt the process by punching WarGod into the machine. The resulting explosion, not only destroys the machine, but turns WarGod into a charred corpse.