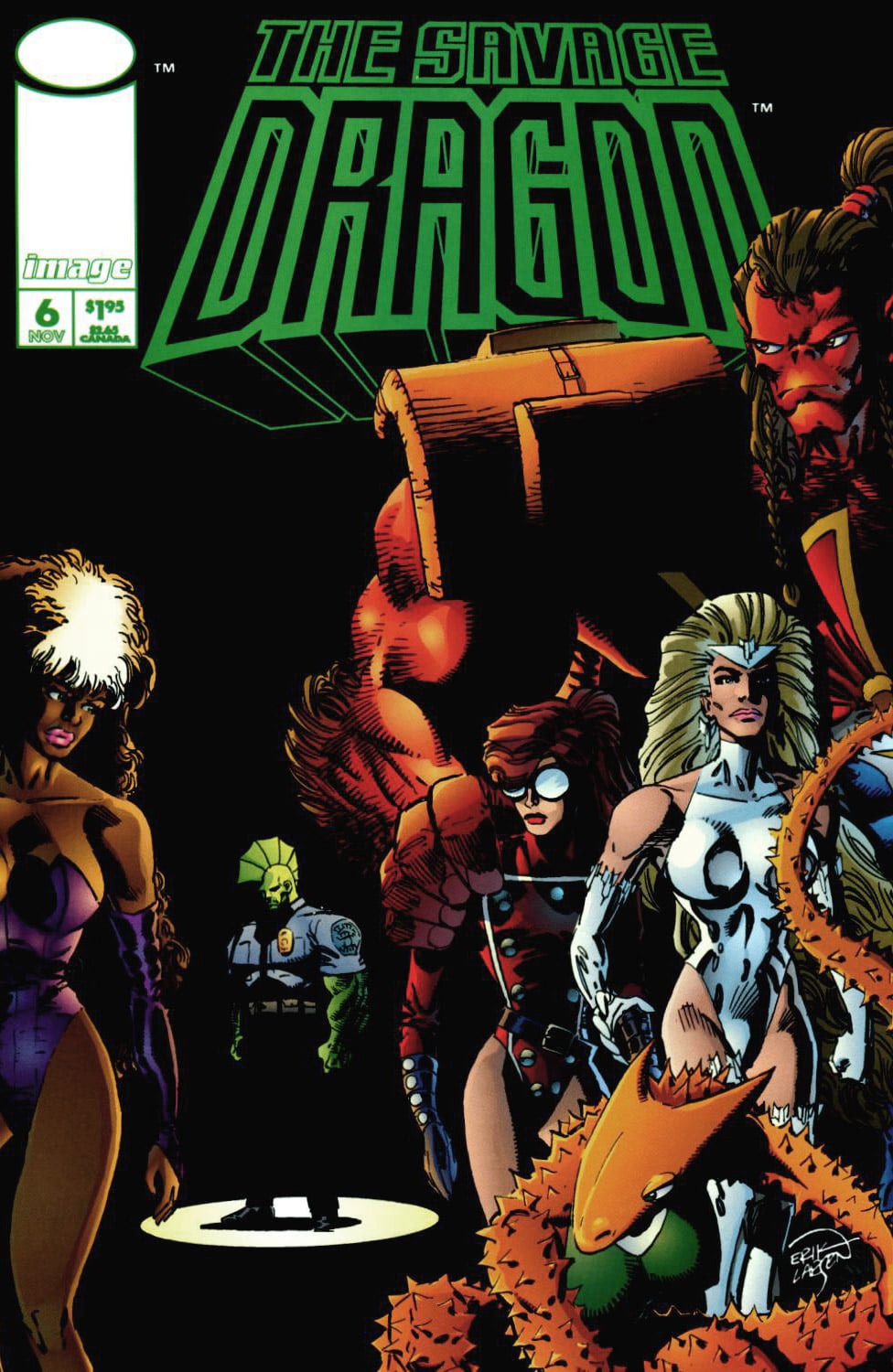 WHAM TV reports on a number of events that have unfolded in Chicago recently, starting with how the Shrew has been cleared of the murders he committed. The leech that was removed from his neck was blamed on the crimes and he will be released without further charge. Vanguard has been delivered to the Chicago Police Department following a clash with Supreme. SuperPatriot has attacked the Pentagon after having been reprogrammed by the Covenant of the Sword. The publisher of the Chicago Voice newspaper, R. Richard Richards, has begun a campaign against Freak Force. CessPool has filed a lawsuit against the police over the method with which he was arrested. Sam Haze interrupts this article with live footage coming from the fight between the Annihilators and Freak Force.

Dragon manages to hold his own against his opponents but CyberFace brutally beats down Horridus without mercy. Dart ignores the directives given to her regarding her weapons and impales War Hawk with several darts before beating him down. MindWarp takes mental control of Dragon and has been punch himself multiple times before his telepathy is fought off like a virus. Dragon takes out the villain before intercepting spikes fired at Rapture by Shard.

Dung blasts Rapture with his fecal matter while Barbaric panics after punching a villain’s head clean off of his body. Dart is now beaten and bloodied and notes that they are getting slaughtered by their opponents but the new Mighty Man suddenly bursts in. He easily defeats most of the criminals, sending them fleeing towards a teleportation device that would allow them to escape. As the mechanism is activated, Barbaric destroys the controls and possibly kills then all.

Dart is furious with Mighty Man over the fact that he could have prevented all of those villains escaping from Stronghold Penitentiary a few months ago. Mighty Man apologises for his previous inaction but returning from the dead caused him some disorientation. Horridus recovers from her injuries in hospital and is watched over by her teammates.

William Jonson brings over Emily Schwartzblatt to finally be reunited with Dragon but he has absolutely no memory of her. Dragon is shown photographs of Rodney Schwartzblatt and admits that he can see the likeness between the pair but nothing about this registers with him. Emily is upset that her son has been missing since 1986 and she admits that Dragon is no longer her son.

Barbaric grows frustrated with Captain Stewart berating him over his actions, complaining that he is not well enough trained when he was rushed through the police academy at a fast pace. Dart goes for a drink with Mighty Man who states that he cannot join Freak Force as he is not comfortable revealing his secret identity and he has other responsibilities in his other life. Dragon approaches CyberFace with a proposed deal that would involve him giving evidence against OverLord in exchange for his freedom.

Freak Force is informed that they must begin wearing police uniforms and all of these various new restrictions being introduced are finally enough for them. They opt to quit the Chicago Police Department and go it alone. They bid Dragon farewell before setting off, leaving Dragon to be approached by Alex Wilde, pleased to finally get to work with him again at least. Frank Darling has been left by his wife but he has now received some good news to counter this. CyberFace has agreed to the police’s deal and a warrant has now been issued for OverLord’s arrest…

NOTE: The “Savage Dragon Vol. 2: A Force to be Reckoned With” trade paperback collection adds in a new one-page prologue in which a member of the Vicious Circle brags about how Freak Force will wipe out CyberFace’s gang, and OverLord states that the Annihilators are not a worthy threat, but CyberFace knows OverLord’s real identity, and that information must not fall into the hands of the police.