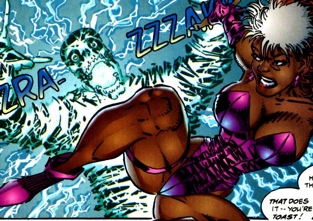 Wimp was one of the freaks recruited by CyberFace for the Annihilators that were formed for the sole purpose of conquering the Vicious Circle. He was struck down by Rapture when Freak Force carried out a raid upon the Annihilators. Wimp was later a part of a group of super villains that attacked Solar-Man. He was killed during the attack.