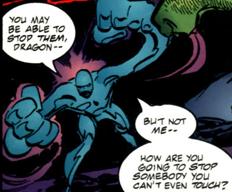 When Dragon got a hold of a Martian shrinking gun, Bloop was one of dozens of Vicious Circle members that were reduced in size. Thanks to his unique powers, Bloop was the only one of this group that was able to regain his previous form without outside assistance. He was then reunited with his brother Animal, forming a partnership that led them into the employ of OverLord II. They then worked together to mastermind bank robberies and other crimes.

When the monstrous Virus was captured by OverLord III, Bloop was one of the few villains present that escaped unmolested. He got to witness firsthand the mistake that occurred when OverLord brought the creature to their stronghold. Bloop was then very vocal about his disdain of the Vicious Circle’s leadership and direction under their latest commander, leading his comrades in a defection from OverLord’s rule. One night, Animal and Bloop arrive home and discover Jennifer alive and well in one of their beds. While they are both suspicious they are unable to form a proper conclusion until Battleaxe attacks their home. It is then revealed that Jennifer is not actually Jennifer, but the shape changer Mutation. It turns out that Animal and Blood had brought in Negate to see if “Jennifer” really was who she said she was. Negate touches Mutation who turns to be Gertie Funk and Helen Black. Battle Axe murders Gertie and leaves with Battle Dragon. Bloop then tells Negate to use his powers on both him and his brother as they are tried of all the death that surrounds their lives as criminals.

No longer a super-freak Cyril and his brother visit their mother who is doing better with her medical issues and the three try to start anew.