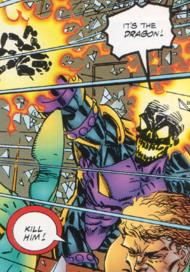 Over the years, DeathMask remained within the Vicious Circle for the years that followed. When Mako gathered together an army of villains to lead against the death-dealing superhero Solar Man, DeathMask was one of those recruited. He was massacred along with almost everyone else present for this assault.