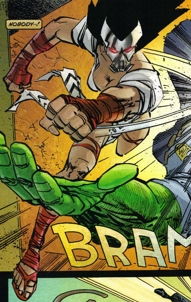 Samurai was one of the many new members of the Vicious Circle that was brought into the group during Buster Justice’s reign. When villains abducted Dragon’s children from their apartment, Samurai laid in wait for the hero’s return. She ambushed Dragon and warned him away from the Vicious Circle’s activities.

Samurai later helps Dart II attack Stronghold Penitentiary to free members of the Vicious Circle. Samurai is present when Dart II kills FirePower and assumes control of the Vicious Circle. When Malcolm is injured in a battle with Red Rage, Dart II puts Samurai in charge of finding him. She is later seen with Dart II berates the VC for not finding Malcolm. She witnesses Malcolm beat the VC and reports it so reinforcements can come to the scene. They later move to Toronto with the other members of the VC during the negation of Chicago