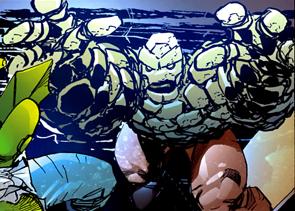 RoadBlock first emerged as one of the many new Vicious Circle members that debuted during the Gang War. He spent the majority of this conflict within the Freak Outpost bar where he seemed to work as a bouncer, dealing with officers Howard Niseman and Chris Robinson when they raided the bar.

A while later, RoadBlock joined dozens of his colleagues in an assassination attempt upon Dragon. All of the Vicious Circle members present were shrunk down to a miniaturised state by a Martian weapon and remained that size for a couple of years. The villains were eventually restored by the Vicious Circle’s resident scientists.

As the years went by, RoadBlock remained a member of the Vicious Circle and when CyberFace took control of the planet, he was loyal to the new King of the World. He became one of those villains commanded by the Possessor to turn upon their leader and after that telepath’s death, RoadBlock continued to fight amongst his colleagues until they were all arrested by the Liberty League. He continued to work in the Freak Outpost, ejecting those freaks that get a little too out of control. They later move to Toronto with the other members of the VC during the negation of Chicago