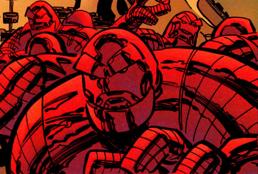 The Dreadheads were the robotic army of Lieberheim’s dictator, Dread Knight, and loyally served him until his death. They clashed with the Special Operations Strikeforce but were shut down following their master’s defeat. The robots were later reactivated when CyberFace took control of the world. He added the Dreadheads to his vast army and had them battle against Dragon at one point.