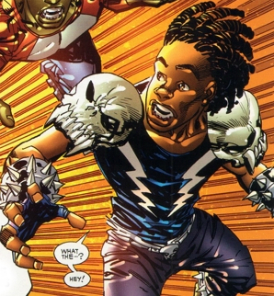 James Worthington was the son of Vicious Circle veterans Cutthroat and GlowBug who lived with his parents in a slum area of Chicago. Cutthroat lamented over the fact that his years as a super-powered criminal had not yielded him the money that he could use to provide for his family and give them a better life than he had himself experienced. When a new order took control of the Vicious Circle, the older members were used largely as cannon fodder and Cutthroat was selected to kill Dragon. After this attempt failed, Rat Bastard was dispatched to eliminate Cutthroat for his failure. Dragon saved the family but James then witnessed his desperate parents try and fail to complete the original mission of killing Dragon. Cutthroat was left with few options but to work alongside Dragon against the Vicious Circle by providing him with information.

Some years later, Cutthroat and GlowBug sought to regain favor with the Vicious Circle and volunteered to take Octopus and OpenFace’s serum to become part of the Dragon Army. After they were arrested and could not receive Freak Out injections to save them, the blood stolen from Dragon killed the villains and left their son an orphan. The loss of his parents left James distressed and he followed in his parents’ footsteps by becoming a super-powered criminal, assuming the legacy of his father as Cutthroat Kid. During a bank robbery where he killed numerous staff and customers, Malcolm and Angel Dragon fought against the youngster who blamed their father for the deaths of his parents. The duo defeated Cutthroat Kid and turned him over to the Chicago Police Department.

The Cutthroat Kid is briefly freed from prision by his friends, but the entire group is quickly defeated by Malcolm. They later move to Toronto with the other members of the VC during the negation of Chicago. They are later arrested after attacking Malcolm Dragon and his family.