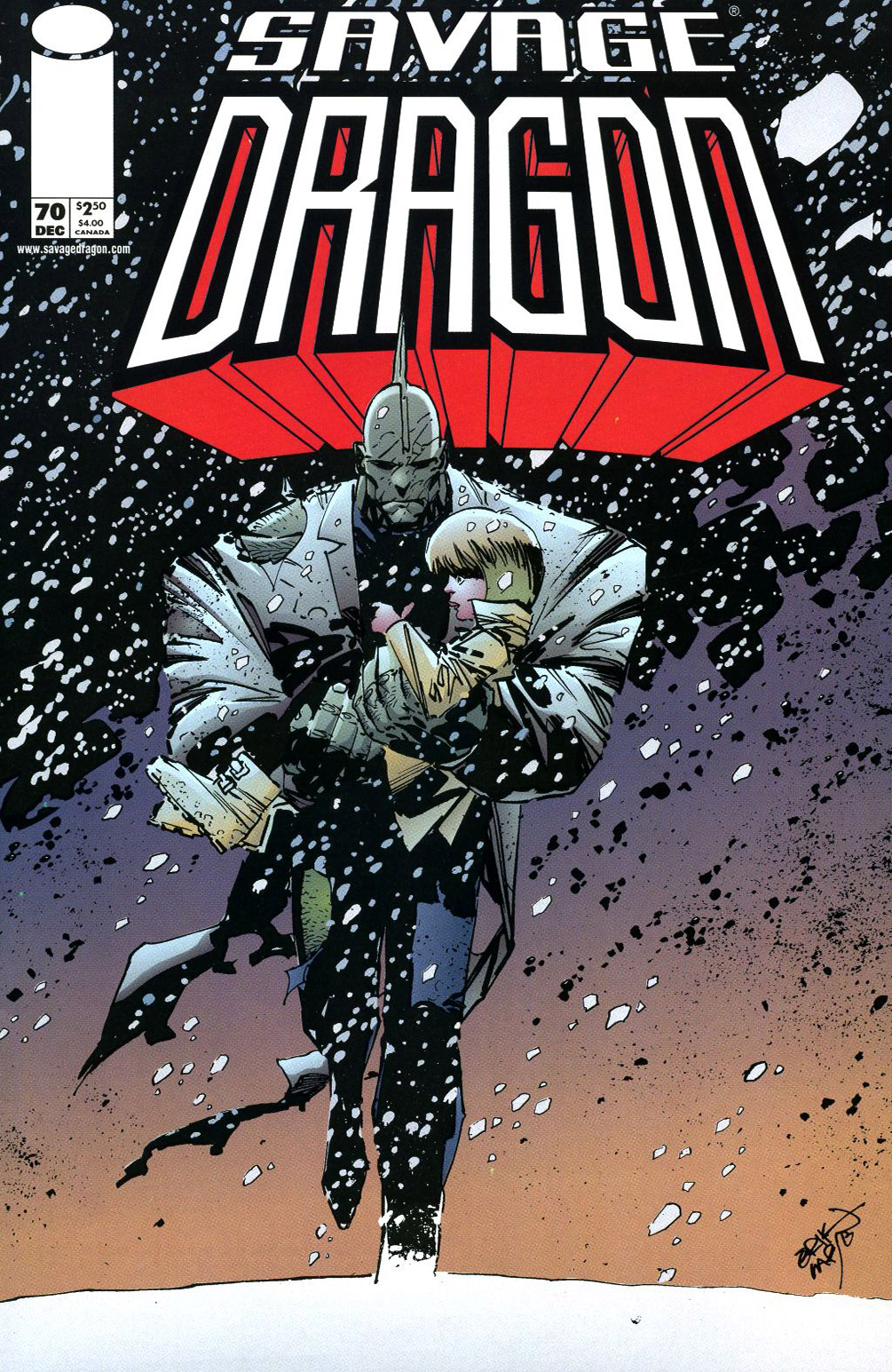 Chelsea Nirvana has been trapped in the body of her elderly and ailing father for some time now. She locates a former hideout of Dr. Nirvana and makes her way inside. Chelsea had come searching for an item that would help grant her revenge and is pleased to locate her quarry.

Mighty Man transforms back into his secret identity of Ann Stevens as he arrives outside Dragon’s head but he had not seen Angel Murphy playing behind a snowman. Angel is amazed by Ann’s transformation and immediately bombards her with questions. Dragon joins the pair and assures Ann that his daughter can keep a secret and that the only way to quiet her down is to answer her questions. Ann explains how she had cared for Robert Berman when he had been beaten and stabbed after the Chicago Voice revealed that he was the human host of Mighty Man. She had been by his side as he passed away and unknowingly inherited his powers. It was not until Ann was cleaning up some spilled milk when she went to answer a telephone call and slipped over; clicking her wrists together and becoming Mighty Man. Dr. Plucker had been calling about an emergency caused by CessPool burning several people with his powers. She eventually figured out how to become human again and now fears that if her dual identities are discovered that she will suffer the same fate as Robert Berman.

At the Chicago headquarters of the S.O.S., Bruce Love comes seeking help as his wife has gone missing. Amanda Love had been saved by Star and Dragon years ago now and Bruce hopes that Star could help locate her. They wonder if Peter Klaptin is somehow mixed up in this as a revenge scheme over his career falling apart since Bruce quit as his drummer and songwriter and taking Amanda Mills as his wife when she had been dating him. Sgt. Marvel interrupts the pair to explain that some villains called the Demon Dogs are causing havoc and the S.O.S. has been called in to deal with them.

In the apartment of Ann Stevens, the nurse notes that her answering machine has a message on it but is encouraged by Dragon not to listen to it. He calms down an obviously nervous Ann as they prepare to consummate their blossoming relationship. Dragon opts to handcuff Ann’s arms apart so that there is no chance that she accidentally becomes Mighty Man. He then pulls out a gun and repeatedly shoots his would-be lover.

Dragon suddenly transforms into the form of Chelsea Nirvana who explains to her dying victim that she had located a device created by her father than enables its wearer to temporarily take on the appearance of another. She takes Ann’s hand as her life fades away and has the Mighty Man abilities pass onto her, instantly casting aside the form of an elderly man to become the World’s Mightiest Man. The answering machine message is then played and reveals that Dragon had been called away to search for Amanda. Chelsea had killed Amanda in order to keep Dragon occupied whilst she stole Mighty Man’s powers.

The body of Ann Stevens is soon discovered by her landlady and the Chicago Police Department are called in. Dragon arrives on the scene and suspects that the Vicious Circle are responsible, targeting his loved ones as a means of manipulating his actions through intimidation. He warns both Frank Darling and Alex Wilde to be careful as they could be the next targets. Ann’s roommate Phyllis Deeder arrives home and is horrified by the sight of Ann but is comforted by Dragon the best he can.

Dr. Nirvana celebrates completing the creation of an invention that he believes will allow him to finally kill his nemesis. Mighty Man bursts through the walls of his laboratory but Chelsea quickly reveals that she is wielding the powers. Dr. Nirvana instantly fears for his life and promises to restore his daughter to her own body and even make her a female again. His pleas are ignored and Mighty Man snaps the neck of his father before heading off to continue his plan.

Christmas comes about and Dragon finds it difficult to enjoy the holidays as he keeps expecting the Vicious Circle to attack him. Frank does his best to cheer him up and is thanked by Dragon for helping give him a life in the first place. Alex jokes about being stood underneath mistletoe but Dragon is not in the mood and states that he loves her too much to start a relationship with her again, fearing that this would make her the primary target of his enemies.

A fight between Santa Claus and the Easter Bunny is won by Santa as the ranks of the Vicious Circle watch on. Mighty Man arrives and attacks the super-freaks, killing FishFace before he decapitates Santa as revenge for not receiving a pony that she wanted when she was nine years old. He seeks out PowerHouse so that he can seize power from him but finds only an ordinary human in his office. This person claims to merely be a member of staff and is startled when Mighty Man abruptly leaves. PowerHouse then asks what happened and is briefed by Fever who notes that Mighty Man behaved oddly before he broke off his assault and left. PowerHouse suspects that this attack was sanctioned by Dragon, wrongly believing that this was payback for his own previous threats.

The now cybernetically-enhanced HellRazor is dispatched by PowerHouse to eliminate Dragon after the Mighty Man assault but the villain is soon defeated. Star catches up with the hero and reveals that Amanda’s corpse has been found after having washed ashore underneath a bridge. He then states that She-Dragon has now gone missing following the clash with the Demon Dogs. Dragon is alarmed by this latest act against the females in his life.

Frank Darling visits Stronghold Penitentiary where he seeks out forgiveness from one of the prisoners there. He speaks with the incarcerated SkullFace and declares that he forgives him over blackmailing and attacking him several years ago. His words cause emotion within SkullFace who has been fused into one position since his confrontation with Frank. The only thing that had been keeping SkullFace going was his hatred for Frank and he begs for the police officer to not take that away from him. Frank accepts this plea and departs.