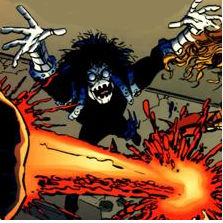 MoreGore was one of the Vicious Circle members present when the shape-shifting Lurch attempted to apprehend OverLord for the second time, trapped into believing it to be Frank Darling. He later served as a Vicious Circle envoy to Securitech Enterprises, a corporation with criminal ties that the vigilante Star helped bring down.

After a couple of years, MoreGore took part in the assassination attempt upon Dragon that left him and his colleagues shrunken down by a Martian weapon. He would spend a couple of years in that state until Vicious Circle scientists restored them all. When CyberFace took over as ruler of the world, MoreGore was one of a small faction that was abandoned in Chicago. These Vicious Circle outcasts were led by Dragon in a rebellion against this rule, successfully deposing CyberFace.

Many years later, Malcolm and Angel Dragon had taken on the role of Chicago’s premiere defenders after the death of their father. They began working in an unofficial capacity for Captain Stewart of the Chicago Police Department. The young heroes were called in to deal with a Vicious Circle operation and Malcolm was severely injured by MoreGore who had been heading up the criminal act. Angel mistakenly believed that her brother had been killed in this exchange and vented her anguish by repeatedly punching MoreGore until his head was completely caved in. Malcolm survived his injuries when it was discovered that he had inherited his father’s regenerative abilities.