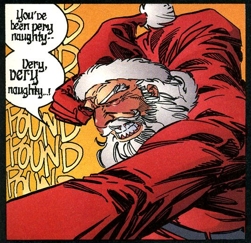 The myth of Santa Claus is pretty well known around the globe. What had not been known by the general public is that Santa Claus became affiliated with the Vicious Circle. He took part in a brutal fight with the Easter Bunny in Pipetown which he won convincingly. He is later decapitated by Dart and has his his head mounted on a wall.