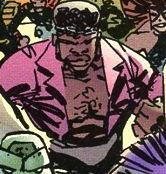 Nuke Rage was one of the many cast-offs of Johnny Redbeard. He joined up with some fellow rejected freaks to become the Throwaways, a team of relatively little skill who were arrested by Freak Force. This caused them to be sent to the M.M.M.S. slave camp for criminal super-freaks.

Nuke Rage was one of dozens of villains dispatched by Horde to execute the Dragon, only to be shrunk down to a miniaturized state by a Martian weapon. Nuke Rage spent a couple of years in this state until Vicious Circle scientists found a way to restore all of their colleagues to their original size.

Many years later, many of the Throwaways began working with the Fantastical Force, also former creations of the Creator. These villains were confronted by a reformed Freak Force but unfortunately for them, the murderous Billy Berman Mighty Man was amongst the heroes’ ranks. He slaughtered all of them without mercy, Nuke Rage included.