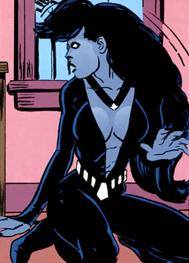 Lethal used to live amongst the tribe of Underground Freaks that Rock led, choosing to hide from society rather than be hated by it. When Dragon arrived to recruit members for the new Special Operations Strikeforce, Lethal was one of the many freaks that signed up for active membership, serving on the team for a few years.

When CyberFace conquered the whole of Earth, Lethal was left separated from many of her old friends. Rock and some of the former Underground Freaks lived hidden from the chaos in the world above but Lethal was no longer amongst them. She returned when Mister Glum had enslaved humanity, becoming one of his superhuman pawns. Lethal would be reunited with Rock during this period and returned to Chicago, moving in with her old friends near the Rock House Diner.