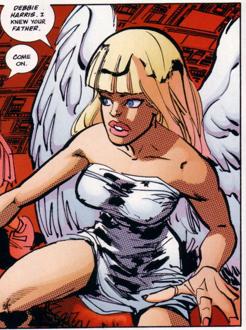 Debbie Harris was an ordinary nineteen year old girl that lived with her mother in the same apartment building as Dragon. She attempted to befriend him on occasion and after a fight with her mother left her locked outside, Dragon agreed to let the young woman stay in his apartment for the night.

Dragon and Debbie ended up sleeping together overnight before being disturbed in the morning by a knock at the door. Debbie’s mother Bonnie knew that she had spent the night with Dragon and telephoned her daughter’s ex-boyfriend Arnold Dimple. She riled him up to the point that he went over gunning for Dragon and fired as the door was opened, shooting and killing Debbie instead of the desired Dragon.

Bonnie Harris was left distraught over the death of her child, perhaps more so because she realised her own part in the murder. She became the host for the Fiend and at one point, brought back her daughter as a zombie. Debbie and the zombified victims of Dragon’s possessed rampage were turned loose on Dragon but were ultimately returned to their natural dead state.

Years later when Dragon was trapped on the dying Darkworld, he sought out that reality’s version of Rapture to save her to make up for being unable to protect his own Rapture from DarkLord. He instead came across Debbie Harris, now a drug-addicted prostitute, and opted to save her life as his original goal went unattained.

Debbie spent months aboard a flying saucer as Dragon piloted it towards Earth but the vessel was brought down over Godworld. Debbie was mortally injured but was saved when the Gods transformed her into one of their own. She remained there until Godworld was destroyed, finding herself finally home once more.

After a few years on Earth, Debbie detected an impending disaster and read the mind of Damien DarkLord, discovering that Universo was coming to feed on the planet. She took a group of children towards the laboratory of Rex Dexter but was shot down by Battle Tank, dying from terrible wounds to the head.