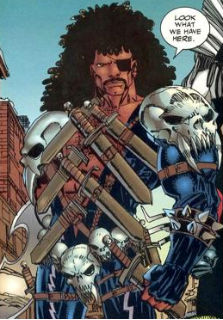 Back in the early days of the Dragon’s career as a policeman, he was kept busy gathering up all of the freaks that had previously been unstoppable and were running loose in Chicago. The first villain he encountered was Cutthroat who was robbing a band alongside his girlfriend, GlowBug. When GlowBug was rendered unconscious with a single punch and his own attacks proved useless, Cutthroat realized that he was out of his league and surrendered.

During the prison breakout at Stronghold Penitentiary a few months later, Cutthroat passed the still incarcerated Hardware. The villain had been attempting to get an early release by offering to testify against OverLord which earns him a summary execution by his Vicious Circle teammate. He then joined his companions in reuniting with the rest of their criminal organization.

Following the initial clash between Dragon and OverLord, the super-powered policeman had gone missing. OverLord dispatched two of his assassins to locate the hero and eliminate him before he gets a chance to recover, should he actually still be alive. Cutthroat and HellRazor tracked down the wounded officer but still get defeated, Cutthroat getting his leg broken.

When CyberFace seized power of the Vicious Circle, those members loyal to OverLord split off from them. Cutthroat remained in Chicago with this faction of the group as their former allies went on to serve CyberFace when he seized control over the entire planet. The abandoned Vicious Circle was in shambles and led by HellRazor when their enemy the Dragon recruited them to oppose CyberFace.

As the years rolled on, the older members of the Vicious Circle found themselves at the mercy of their younger compatriots. Cutthroat was dispatched to assassinate the Dragon but he failed in this task once again, causing Rat Bastard to be sent to eliminate him, and his family which now included a young son. GlowBug and Cutthroat were saved by Dragon who recruited the reluctant villains to pass on information regarding the Vicious Circle’s new power structure.

Some time later, OverLord III had charged Octopus and OpenFace with the task of utilizing Dragon’s blood as a means of transforming the Vicious Circle into an unstoppable army. Cutthroat and GlowBug were given a chance to make amends with their old allegiance by serving as guinea pigs. Unfortunately for them, they could not get their regular shots of the serum which resulted in their bodies exploding, leaving their son to grow up an orphan.