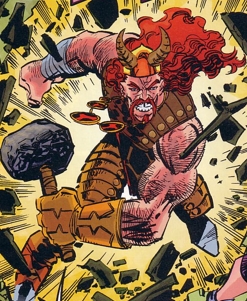 Thor’s time in mythology played out roughly as it did in Norse legend but it came to an end when he was banished to the planet of Godworld. This world was created by the various pantheons of Gods to serve as a home to their ever-increasing population. Thor’s troublesome nature caused him to be imprisoned there.

Dragon and Smasher crash-landed on Godworld which brought them into conflict with the Gods when they tried to abduct their companion, Debbie Harris. Thor identified Smasher as a mortal woman and sought to rape her but Dragon and Herakles came to her aid. The mortals were teleported back home and Thor’s plans of invasion were left unfulfilled without a means of getting back to Earth.

When the God Squad was dispatched to Earth to gather up the Gods’ offspring they suffered terrible casualties during a battle with Zeek. Thor was sent to Earth with an army to retrieve their fallen allies but when Godworld was destroyed by mortals, the Gods were left on Earth to find a new home there.

Thor led his brethren to Atlantis where they raised the underwater city up and seized it as their new home. The Atlantean eventually reclaimed his home through the use of the gigantic Grokk sea monsters.

Years later, the Gods resided in the Hidden City of God Town where they remained distant from humanity. Dragon requested that the Gods help him overthrow CyberFace but they rejected this notion. The hero’s human companion, Annie, was escorted back down to the mortal land by Thor who raped the poor woman. Annie became pregnant from this assault and gave birth to a son that she named Oliver.

Thor discovered the existence of Oliver and murdered Annie before taking his new son back to God Town, renaming him Mikki. Dragon attempted to apprehend Thor for these crimes and brutally beat him before the Gods teleported away into hiding. Thor was kept imprisoned until he attempted to enslave the Forever Serpent to use against his enemies. The creature instead ate Thor and after it was killed; its corpse was deposited in Dimension-X to rot.

After years adrift in Dimension-X, Thor came across Glum World where he came into conflict with Mister Glum. Their mutual hatred of Dragon came to light and Glum agreed to teleport Thor back to Earth. Thor confronted his enemy but was unaware that Dragon was now in his original Emperor Kurr persona. Although Thor dominated their fight, Kurr succeeded in destroying his opponent’s eyes and ears. This left Thor vulnerable and the God Squad made their move and apprehended the renegade God.

He eventually escapes from the Gods thanks to his son Mikki and seeks to challenge Malcolm. During the fight Thor accidentally kills his son and is eventually captured.