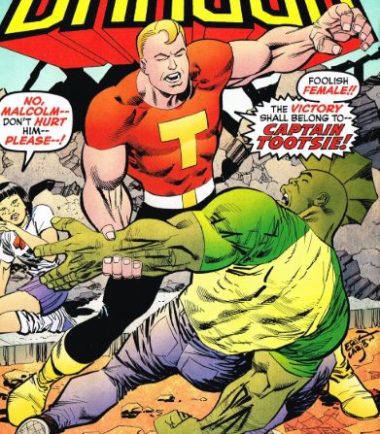 Captain Tootsie was a super strong and agile hero during the 1940s and ’50s and was a pitchman for Tootsie Rolls candies. Tootsie mentored the Secret Legion, a kid gang that went on adventures with him.  In the 1950s, the government asked Captain Tootsie to test a newly developed rocket ship, the Rocketeer. Members of the Secret Legion stowed away on the ship and were discovered by the Captain after the rocket had already launched. The group traveled throughout the solar system and, at times, battled aliens.

At some point in the 1950s, after returning to Earth, Captain Tootsie and other golden-age heroes were imprisoned by Solar Man who used a large contraption to keep them in suspended animation.  Solar Man’s contraption kept the heroes in stasis while he siphoned their power to use as an augment to his own  powers. When Solar Man reemerged in 2006,  Rex Dexter stumbled upon the device in Solar Man’s lair and opened it, thus freeing Captain Tootsie and dozens of other heroes that had been trapped for over sixty years.

After regaining his freedom, Captain Tootsie eventually joined the Special Operations Strikeforce (S.O.S.), becoming a United States government agent.  As a member of the S.O.S., he helped thwart a major demonoid  invasion of Chicago.