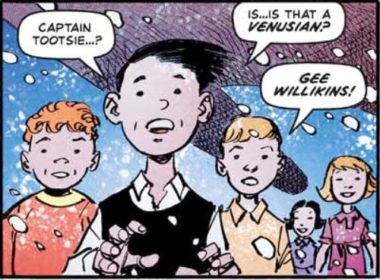 The Secret Legion is a kid gang that went on adventures with Captain Tootsie during the 1940s and 50s. They use a government created rocketship, the Rocketeer, to travel the universe and at times, battle aliens.

At some point in the 1950s, Captain Tootsie was imprisoned in suspended animation with a bunch of other golden age heroes by Solar Man.

Around that time, the Secret Legion gang became lost in space while flying in the Rocketeer. In 2018, Captain Tootsie (recently freed from Solar Man’s suspended animation device by Rex Dexter) broke into a laboratory in Toronto to utilize its technology and send a homing beacon to the Rocketeer ship to guide the Secret Legion back home to Earth for the first time in over sixty years. It is revealed that the kids have not aged since time passes slower while traveling at the speed of light.