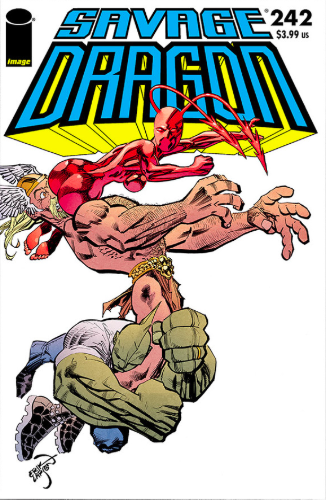 At the University of Toronto’s Annual Tri Campus Snowball Fight, Malcolm and his friends are divided up into men vs women. As they all have fun, Malcolm double-checks with Captain Tootsie that he really is not going to drag him back the United States where he is still a wanted man. Tootsie assures him that he only took the assignment so that he could retrieve the Secret Legion. It would have been impossible to summon an alien spaceship to the United States without everyone getting arrested.

Angel and Frank flirt amidst the snowball carnage whereas Maxine takes the opportunity to throw snow at Malcolm. He gets fed up with her constant verbal and physical attacks and asks if he should just leave her for good, something he does not want. Maxine also does not want that to happen and the couple apologize for their past actions.

Presumably as a result of the snowball fight, Maxine comes down with a cold and is left bed-ridden. She is annoyed that as the only person in the family without healing powers that she is the one to always get sick. Malcolm arranges for Angel and later Thunder-Head to be there to help care for the kids should he get called out on assignment so that Maxine will not have to worry about them. He then catches Angel telling the kids the truth about all of their true parentage.

Malcolm is annoyed at Angel’s actions as she had long-since agreed to hold to the ruse that Maxine and he are the triplets’ parents. She argues that Laila should have known that she had a little brother and that Jackson should know that his real mother is her. Malcolm points out that she had Jackson aborted and it’s only because of the Chosen One powers that he even survived. He is then called into action and hears Angel telling the kids how a foursome with all of their parents is their true origin.

It seems that Ant had arrived in the city and was fighting a god named Ragnok who is apparently possessed by someone else. Malcolm is not entirely convinced that Ant’s explanation that the Illuminati are real and that they are again conspiring to bring about the Biblical Rapture. Ragnok has had a billionaire old white man named Anthony Toliver beamed into his body as a trial run for the rest of the Illuminati to do the same. They would then use the Gods to become their new forms so that they can survive the end times that they would help create.

Meanwhile, Frank arrives to collect Laila and discovers that Angel has told her and Tyrone the truth that they are siblings. Frank has run out of vacation time and must return to Chicago but Laila will not be able to take her brother with her because of his illegal status in the United States. He instead proposes to Angel in the hope that she can at least come and live with him. She does not wish to leave Jackson behind but agrees to talk about it as Thunder-Head arrives to relive her.

Back in the fight, Ragnok punches Malcolm away and continues his rampage; shrugging off every attack from Ant. Malcolm eventually leaps back into the fray and his electrical powers are enough to shock Toliver out of the god. An enraged Ragnok breaks the neck of the man who had violated his body and departs. Malcolm cannot find the motivation to pursue him over this murder as in his mind justice has been done.

Captain Tootsie completes repairs to the last surviving sex-doll, Amber, and dresses her for her new role as the Dragons’ maid. The Secret Legion and he try to come up with a new name for her and she chooses Greta Gearbox. Back at the Dragon household, Madeline crawls towards her mother who panics and calls for Thunder-Head to come collect her before her daughter’s electricity kills her. She manages to get out of the bedroom without being touched but finds Thunder-Head lying in a pool of his own blood and the now independent Monster Cock of Basilisk poised to strike at her…

Malcolm Dragon brings an unconscious Ant home where a worried Maxine questions the wisdom of bringing her there. He could not risk leaving Ant with the police as they would have likely unmasked her and that is frowned upon amongst superheroes. It is explained how Ant has warned of a man named Alzayah Stone who has been granting superhuman abilities to all sorts of criminals which would explain why Chicago has so many super-freaks there.

Ant awakens and agrees to meet up in New York City with Malcolm where they are to join up with Spawn to confront their foe. Malcolm endures a flight where he is bombarded with questions by the other passengers about his life and the legacy of his father. He finally arrives and is greeted by Ant and the pair takes a taxi together. It is during this journey that Ant explains how the super-rich are preparing to bring about the Biblical Rapture.

This conspiracy is dismissed by Malcolm as far-fetched as the end of the world cannot possibly benefit anyone. Ant is convinced that this is the case though as the people responsible genuinely believe that they will be taken up to Heaven. The New York traffic halts their drive and so the two heroes head out on foot and are soon joined by Spawn. They then discover the source of the traffic has been caused by Monsteress and her army of monsters…