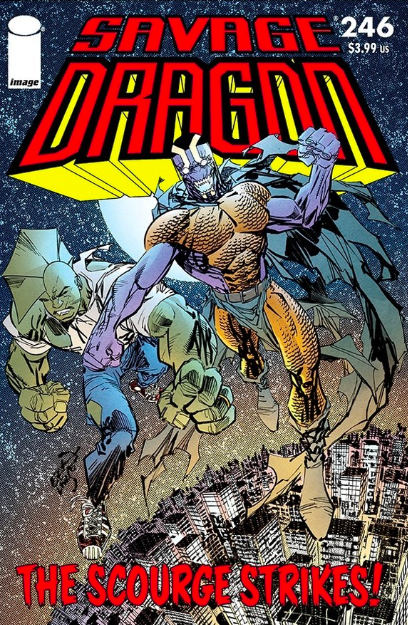 Genetech Laboratories suffers its latest assault at the hands of its ousted founder, the Scourge, who utterly destroys the building. Captain Tootsie was on-hand and attempts to stop the villain as hundreds of innocent employees are killed all around them. The Rocketeer spaceship is destroyed in the ensuing conflict before Tootsie is defeated. With his victory and ultimate goal of destroying Genetech complete, the Scourge departs but Captain Tootsie vows to capture him.

A few days later, Maxine goes to meet up with PJ and apologizes for the way she acted at her party. She knows how sensitive he is about his sex life considering how many years he spent trapped in the body of a child. He asks about whether she ever took the sample of his previously ageless blood but Maxine explains that she was waiting until she turned twenty-five. It was at this age she read that the brain was fully formed and you reached physical peak. PJ is then informed that the blood was indeed taken on her recent birthday to effectively make her immortal.

Meanwhile, Malcolm Dragon has been recruited by Captain Tootsie in the search for the Scourge. They are able to track him using a device created from components found at Genetech, the same technology used to build Scourge’s battle-suit. They descend through an opening into where the Demonoids had previously spilled out of during their recent invasion. As the pair proceeds they get to talking more about Captain Tootsie’s life.

It seems that Captain Tootsie did not really invent the Rocketeer but merely found it in an alien crash site and repaired it. He lied to the Secret Legion about its invention as they seemed so impressed by his skills that he liked to keep that image in their heads. Malcolm then wonders just who the Secret Legion are as adults who usually solely spend time with children tend to be thought of suspiciously. He is shocked at this and is adamant that they are simply his fan club.

The heroes eventually reach their intended target but the Scourge had been waiting for them. Malcolm questions the villain’s goals as he has already destroyed Genetech and slaughtered hundreds of innocents. He points out there are any number of superhumans waiting in line to defeat him and should he attempt to become the next OverLord then he would be cut down in no time at all. The Scourge did not mean for things to go this far and requests that he simply be allowed to remain in the underground for the rest of his life, for the heroes to think of this as his imprisonment.

Malcolm refuses to entertain the idea of letting his enemy go as too many innocents have been killed and he still owes him for nearly killing him and Battle Girl. When the Scourge makes it perfectly clear that he will not surrender and that the heroes had best be ready for a fight, Malcolm makes the first move. He is horrified when he accidentally punches a hole straight through the Scourge’s chest and kills him instantly.

Captain Tootsie is alarmed by this killing and declares that they must report to the authorities immediately to inform them of what happened. Malcolm had been tempted to cover up the death by leaving the scene and the corpse down underground. A group of Demonoid women then approach the two men, worried over the Scourge. It becomes clear that these women were his pregnant harem and Malcolm starts to fully realize just what he has done.