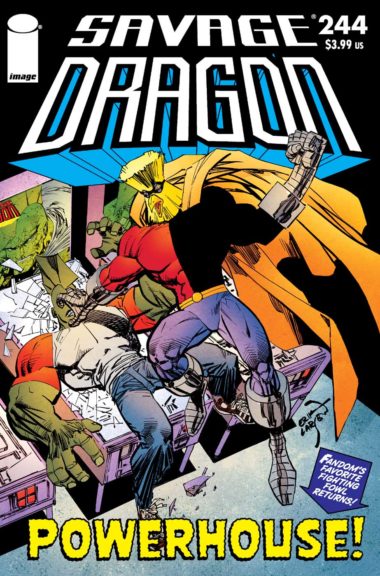 A laboratory filled with freakish monsters is raided by PowerHouse and his companions. They have soon defeated all of the various rampaging beasts and depart to deliver their creator to the authorities. As the trio emerge from the police station, Walden Wang approaches them and makes an offer to PowerHouse to take part in a high-paid pay-per-view fight against Malcolm Dragon. He eventually agrees and even Flash Mercury expresses interest in participating in a follow-up bout.

Meanwhile, Maxine is furious with Malcolm for taking advantage of her when she was drunk. He points out that it was her idea but she is still not over her ordeal with her rape and resurrection. She also fears slipping down the slope back into sex addiction. The heated conversation is interrupted when Walden arrives to hire him for the upcoming fight. He is pretty open to the proposal and it is all soon set up.

A meeting with the men behind the Savage Dragon comic takes place and Malcolm is increasingly annoyed with how they are pacing out his stories. Maxine is angry with how all of the sex has been portrayed but the creators point out how much positive mail they received over that material. The meeting becomes increasingly more strained as Malcolm argues over the kinds of stories that she be included, disappointed that even some of his recent fights did not even make it into the book.

The day of the fight rolls around and numerous people tune in to watch this event which is being held in a condemned warehouse. PowerHouse kicks things off, confident that his previous fights against Malcolm’s father have more than prepared him for this challenge. He takes full advantage over his flight abilities and becomes cocky over his chances. Malcolm retaliates with his electrical powers, something that Dragon never had to use against PowerHouse.

As the contest rages on, the structural integrity of the warehouse is affected and it becomes a crumbling mess. Malcolm soon seizes control and when he inadvertently knocks off PowerHouse’s domino mask; his opponent reverts back to his mortal form. This is a shock to all but Malcolm seizes the opportunity by flicking the helpless Denny Atlas into unconsciousness. The warehouse finally collapses and wreckage buries the vulnerable Denny. Malcolm swiftly digs out his fallen foe but Fever and Flash Mercury race to the scene and extracts their friend. Malcolm then has his arm raised as the winner and claims his paycheck.