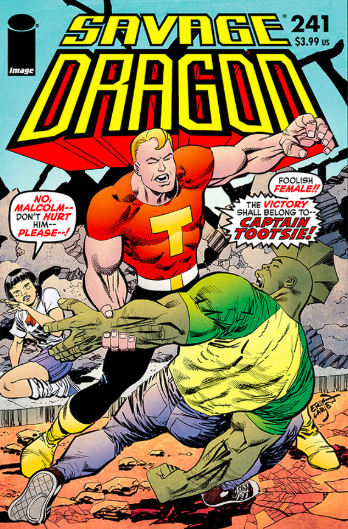 In the aftermath of Norm Spiegelman’s attack on Malcolm Dragon and his subsequent death, Malcolm and the Toronto Police Department search what appears to be Norm’s robot workshop for clues about his motivation. Malcolm is attacked by what appears to be the last functioning, although damaged,  “Perfect Women” robot. The robot is still programmed to kill Malcolm. Malcolm battles the robot while explaining to it that its master is dead. Malcolm’s words seem to have in effect on the robot as it appears to stop attacking and proceeds to sit with its head down repeating the word “dead”, as in disbelief.  As soon as the battle stops, Officer Moonbeam approaches Malcolm to inform him that the department found surveillance camera footage of Basilisk’s attack on Maxine and thought that he may want to see it before it is erased.

At Toronto Pearson Airport, an elderly man by the name of Buddy Costanza greets Captain Tootsie who has come out of the arrival gate. It appears that the two have known each other since Buddy was a kid in the 1940s/1950s and this is the first time seeing each other in over sixty years, since before Captain Tootsie was imprisoned in suspended animation by Solar Man.  During their conversation, it is also revealed that Buddy’s older brother was a member of the Secret Legion, a kid gang that went on adventures with Captain Tootsie; and had, at times, battled aliens.

Back at the Toronto police headquarters, Malcolm is in tears after viewing the surveillance video of Maxine’s attack. Malcolm insists that Officer Moonbeam destroy the tape immediately, for fear that it could be leaked to the public.

At Malcolm and Maxine’s apartment, Angel Murphy and Maxine have a conversation while Angel changes Maddy Dragon’s diaper. Angel tells Maxine that she needs to think about telling her sons about their real mothers. Maxine disagrees and blames Angel’s outburst on the events caused by Mister Glum’s recent merging of multiple worlds,  in which the collective consciousness witnessed an alternate reality where Angel married Malcolm.  Maxine accuses Angel of wanting Malcolm back. Angel does not deny it and proceeds tell Maxine that if she does not reestablish a healthy sex life with Malcolm she may lose him, and Angel would be “right there to scoop him up!” Malcolm walks in on the heated conversation which puts an end to it as Angel heads out.

Meanwhile, Captain Tootsie and Buddy Constanza appear to break into Genetech Laboratory under the cover of night.

Back at Malcolm and Maxine’s apartment, while in bed, Maxine reveals to Malcolm that she intercepted Officer Moonbeam’s text confirming that the surveillance video was destroyed. Maxine is furious that Malcolm viewed the tape and accuses him of believing Basilisk’s last words that Maxine enjoyed his sexual attack.

The next day, Malcolm and Maxine go Christmas shopping at Eaton Center Mall. Malcolm seems to be enjoying the attention of various women that recognize him and want to take photos with him. Meanwhile, Maxine is clearly not enjoying the attention she is getting from men ogling her and making rude remarks about the unflattering viral video of her that made the rounds. Maxine has an outburst before punching one of the men and finding Malcolm to take her home. While Malcolm and Maxine are driving home, Malcolm gets a call from the Toronto police asking him to help with Captain Tootsie and Buddy who have barracked themselves at the Genetech lab.

It appears that Captain Tootsie has used the laboratory equipment to send out a distress call of some sort right before Malcolm gained access to the building and leapt toward the Captain, smashing the floor. Captain Tootsie proceeds to attack Malcolm, knocking him through the laboratory wall to the outside. After plenty of banter and fisticuffs, a large rocket ship appears above them and proceeds to blast Malcolm. Captain Tootsie commands the Rocket to stop firing.  It is revealed that the rocket ship was holding the Secret Legion kid gang.  They were lost in space and able to find their way back to earth after receiving the beacon signal that Captain Tootsie sent out. It is revealed that the kids have not aged since time passes slower while travelling at the speed of light. Apparently, Tootsie was battling Malcolm as a diversion in order to stall for enough time to allow the Secret Legion to follow the beacon signal home to earth. The two seem to part on good terms.

The last scene in the issue cuts to a Christmas gathering at Malcolm and Maxine’s apartment. Kevin Gorelick (Thunder-head), Mei Ling, and their daughter Julia show up first. Frank Darling Jr. and his daughter Laila surprise everyone by bringing a grown-looking P.J. to the party. It is revealed that P.J. took a dose of “Freak Out” to negate his anti-aging powers.  The issue closes with P.J. pulling Maxine aside to offer her a vile of his “anti-aging” blood that he saved before taking the “Freak Out” serum.