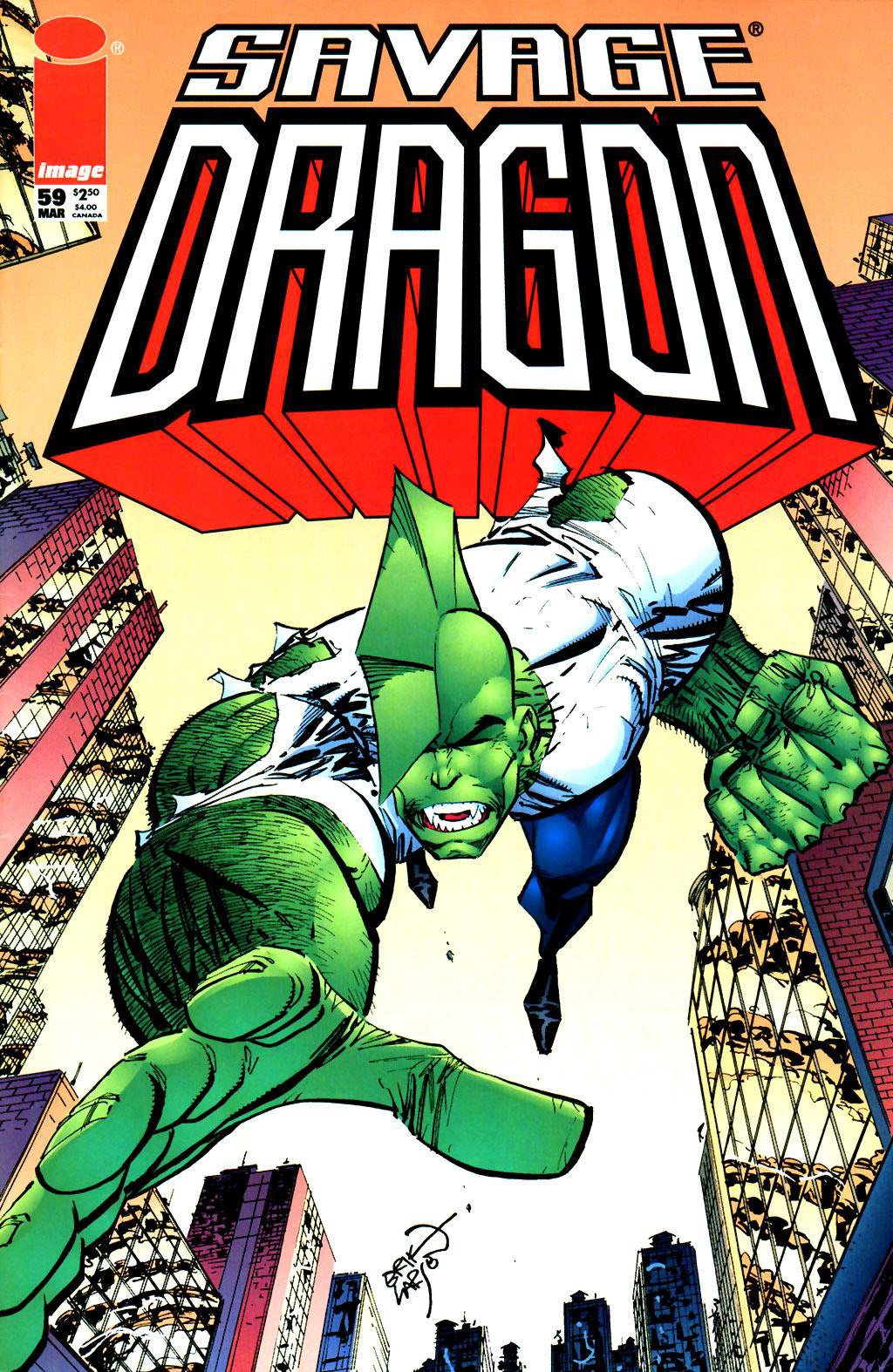 Dragon fights against a gang of super-freaks whom he single-handedly takes down with relative ease, causing their leader to run away in fear. Big-Fish is unable to make his escape though as Smasher confronts the villain and renders him unconscious with a single punch. This battle marks the return of Dragon and Smasher to the ranks of the S.O.S., this time for the newly formed Chicago division of the government super-team. After Dragon’s return from the dead he had been unwilling to be apart from Smasher and when the Chicago branch was said to be opening, Dragon accepted the position as leader of this new team.

Going back several months, Dragon and William Jonson had just been restored by Fon~Ti to their original forms. William is reunited with his worried fiancée Rita Medermade while Alex Wilde provides Dragon with some clothing. Dragon was unsure about whether or not he had a place to stay in Chicago and when Smasher offers him a room at her house, he jumps at the chance.

Dragon and Smasher spend the entire night just talking to one another, getting to know each other all over again. Angel Murphy makes things slightly awkward with her constant intrusion upon them and her general ignorance to the couple trying to start a relationship. It is not long before William and Rita put together a wedding ceremony as quickly as possible. Rita had wanted to get married before her pregnancy caused her to get too big for her dress.

A lawyer representing the Possessor learns that his client has been kept sedated since he had been arrested for causing chaos in Chicago. The warden of Stronghold Penitentiary is not at all interested in allowing the Possessor to awaken. The Possessor is going to undergo radiation treatment soon and his lawyer hopes to speak with him to learn whether or not he is guilty of the crimes he had been locked up over but this desire is rejected.

As the months pass by, Dragon and Smasher’s relationship blossoms and they fall completely in love with one another. Dragon decides to make it official that he is not returning to the S.O.S. and pays a visit to Complex One. Rock takes Dragon to speak with Stephenson who reveals the news that a precinct is finally going to be opened up in Chicago. The plan is to use Chicago as a training ground for new members and that Dragon would lead a small team in his home city. The decision to have such a minor presence in Chicago disgusts Dragon and he turns down the job offer and quits the team.

Dragon begins to form a relationship with Angel Murphy who slowly starts to accept him in her life and with him dating her mother. Dragon suggests to Smasher that they should sign up with Chicago’s branch of the S.O.S. as Sgt. Marvel has been made the leader. He is backed up with Star and Horridus, meaning that their ranks barely have any super-powers amongst them. Smasher refuses to even talk about this subject, unwilling to raise her daughter around a life of violence.

As he stops by the Chicago Police Department to visit his friends, Dragon is informed by Frank Darling that She-Dragon has just been recruited away by the S.O.S. The super-cop packs up her belongings and Dragon tries to convince her not to abandon the police force. She-Dragon points out that Dragon did the exact same thing and it was now his turn to pick up the slack in Chicago.

Dragon receives a telephone call from Rock who talks about how Mace had been assigned to protect a homophobic author. The former vigilante had returned to his murderous ways and killed his charge and has now gone on the run. Dragon then enjoys his first Christmas in a family unit with Smasher and Angel Murphy, making up for the previous year when they were stranded in space.

The Vicious Circle has divided into factions and one such group discusses the current status of the entire criminal organisation. BrainiApe is leading one rival faction whilst OverLord is now starting to gain ground on them. PowerHouse’s group discuss the possibility of manipulating Dragon into ridding them of their rivals but he appears to be a non-factor since quitting the S.O.S.

Smasher has started to bring up the subject of returning to heroics all by herself after seeing the state of Chicago and not wanting the city to become a warzone. She and Dragon are enjoying a walk with Angel when the new S.O.S. is cast aside by a super-freak named Turf. This behemoth casts aside Star and Horridus but his actions prompt Smasher to leap into action. She is soon joined by Dragon and together they shatter the villain with their blows.

Back over at Stronghold Penitentiary, the Possessor is transported through the prison facility after his latest bout of radiation therapy. He stops breathing but the warden notices that the inmate is not sedated and demands that the medical team let him die. The warden begins screaming to kill the Possessor as someone on the other side of a wall begins punching their way through…