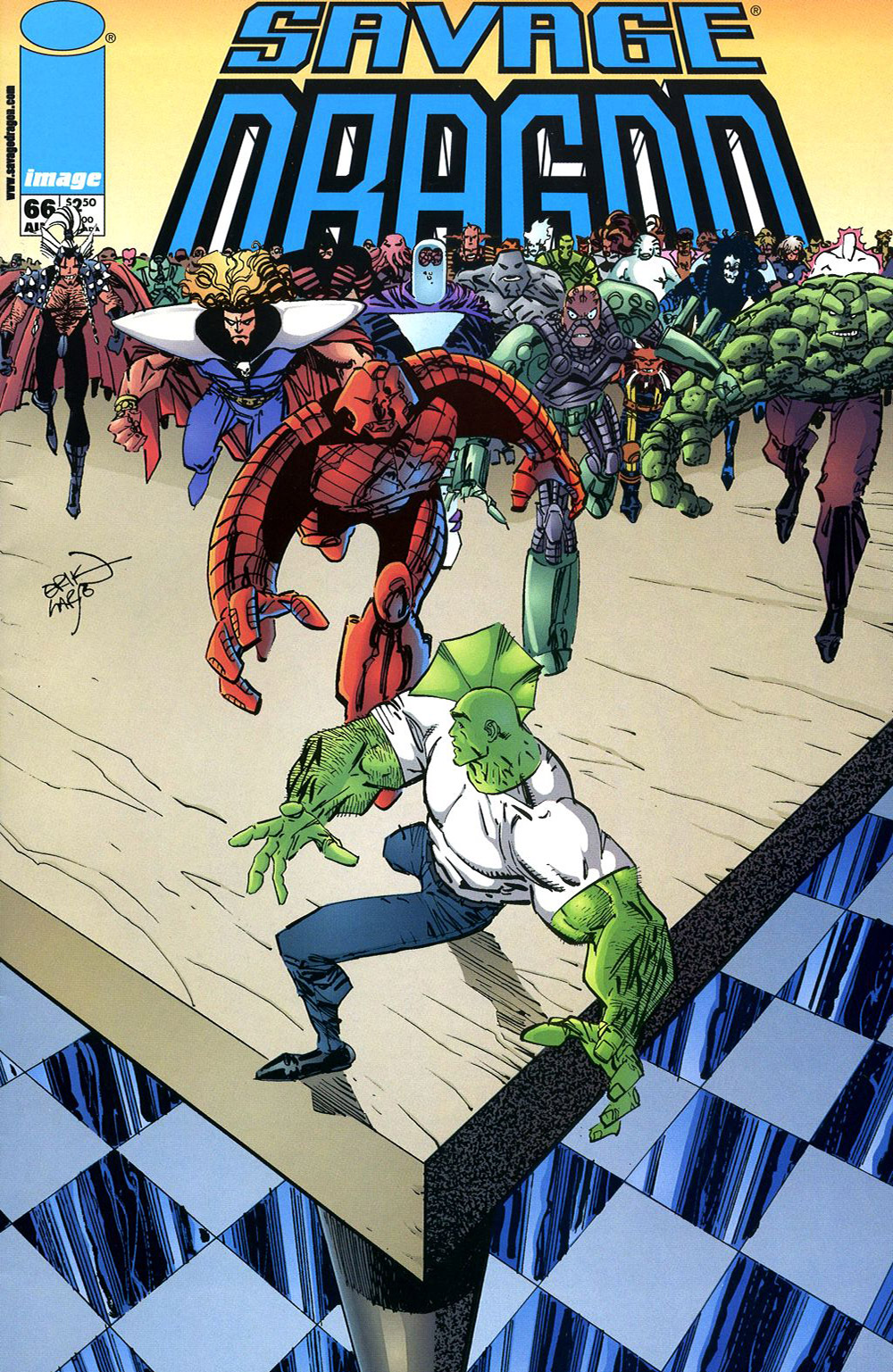 Dragon takes his daughter with him to see William and Rita Jonson’s newborn baby twins and to have dinner with the family. Dragon is alarmed to discover that the children were conceived whilst his essence was within William’s body, albeit before anyone knew that this bonding had occurred. Angel Murphy points to Peter Jonson and questions just why he is so ugly. This distresses Rita and Dragon demands that Angel apologises despite agreeing that the infant is strange looking.

After their dinner, Dragon lectures his daughter over some of the things she said during the meal which includes insulting the food itself. Dragon appeases Angel with the promise of a Burger King before Angel talks about how her life has gotten weirder since he became involved with her mother. Angel thinks that she should be given super-powers and could then start fighting bad guys too.

Mighty Man flies down out of the sky to visit Dragon who has moved back into his house. He transforms back into Ann Stevens who wishes to make amends over previously bursting into his home in her powered form. Dragon reassures Ann that there is nothing to be sorry over as it was the Possessor’s fault that Mighty Man attacked him. Ann hopes to help Dragon attain some happiness now that Marcy has left him all alone. Dragon points out that he is not exactly alone as Alex Wilde has already began another casual relationship with him.

Dragon and Frank Darling entertain their children in a playground as their respective partners talk amongst themselves. Mildred is pleased that Dragon seems to be happy again and advises Alex that she should not let him get away again. Dragon informs his best friend that his late wife’s aunt and uncle are trying to get custody of Angel. The dangers of Dragon’s life make the custody case worrying and Frank wonders that perhaps he and Alex becomes an official couple. Dragon is not eager to have a repeat of Smasher’s murder and does not want to enter into a relationship just to help him win a court case.

An emergency call goes out across the police frequency regarding a thief armed with a Martian shrinking gun robbing a bank. Dragon leaves Angel with his friends as he races to the scene, eager to prevent the alien weapon getting in the hands of the Vicious Circle. He arrives soon enough but is shot with the shrinking gun. Despite his tiny size, Dragon is able to take down the robber before discovering that an elderly woman has similarly been shrunk down. She reveals that a number of hostages were reduced in size but the rest were all ground into the floor by the criminal. Dragon promises the survivor that the gun will be analysed so that its effects can be reversed.

The Vicious Circle’s miniaturised members teleport onto the scene via one of Gateway’s portals and declares that Dragon will not benefit from any reversals. DownLoad commands some of his companions to gather up the weapon while the rest of them deal with Dragon. The hero leaps clear to a window with the hostage before shattering the glass. The shards rain down upon the villains and DownLoad is impaled, revealing that a small human resides within its robotic exterior.

Brawn presses the assault upon Dragon as some of his colleagues join the fray but most of the villains are fended off. As the police arrive on the scene, Brawn tackles Dragon and the pair is projected forward out into the street and down into the sewers. Dragon is relentlessly punched by Brawn who describes the horror that has been the past year or so of his companions’ lives. The duo fall into sewer water and they are separated as they go down a waterfall. Brawn’s head strikes a block of concrete but Dragon is washed away. He eventually pulls himself free of the water where he can finally rest, unaware that a large number of rats are now stalking him.