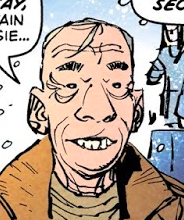 Approximately sixty years later, Captain Tootsie is freed from suspended animation, still as young as when he was captured in the 1950s. The Captain eventually seeks out his old friend, Buddy Costanza (now an elderly man), for help in trying to guide the lost Secret Legion back to Earth.  Buddy, a former nightwatchman at the Genetech Laboratory in Toronto, helps Captain Tootsie break in to the laboratory and access the equipment needed to send a homing beacon the the Secret Legion.  They are successful in guiding the Secret legion home and when the gang exits the rocket ship, it is revealed that the kids have not aged since time passed slower while they were traveling at the speed of light. Buddy is finally reunited with his older brother, Rollo.