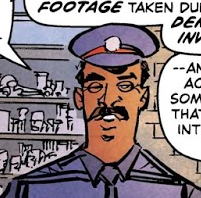 Officer Moonbeam  informs Malcolm that  surveillance camera footage of Basilisk raping and killing Maxine during the Demonoid invasion had been obtained by the Toronto Police.  He asks Malcolm if he wants to view it before they erase it. Malcolm views the surveillance video and is shocked and saddened by the violence inflicted on his wife. Malcolm insists that Officer Moonbeam destroy the tape immediately, for fear that it could be leaked to the public.