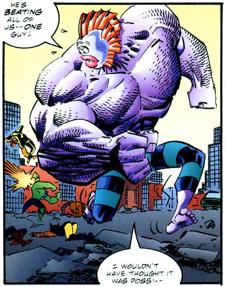 Big-Fish was one of the first villains that Dragon faced upon returning to official action after his “death”, where his mind was trapped within William Jonson’s body. The villain and his entire crew were brought down by Dragon and Smasher.

Big-Fish did not resurface again until Mako was trying to gather an army to take on Solar Man. Although his crew all went along for the ill-fated assaulted upon the death-dealing superhero, Big-Fish wisely avoided the fight. Every single one of his close allies were massacred by Solar Man in the ensuing battle. He is later one of the VC members who try to force Neutron Bob to rob an arms base, but he knocked out by Neutron Bob who turns against them.