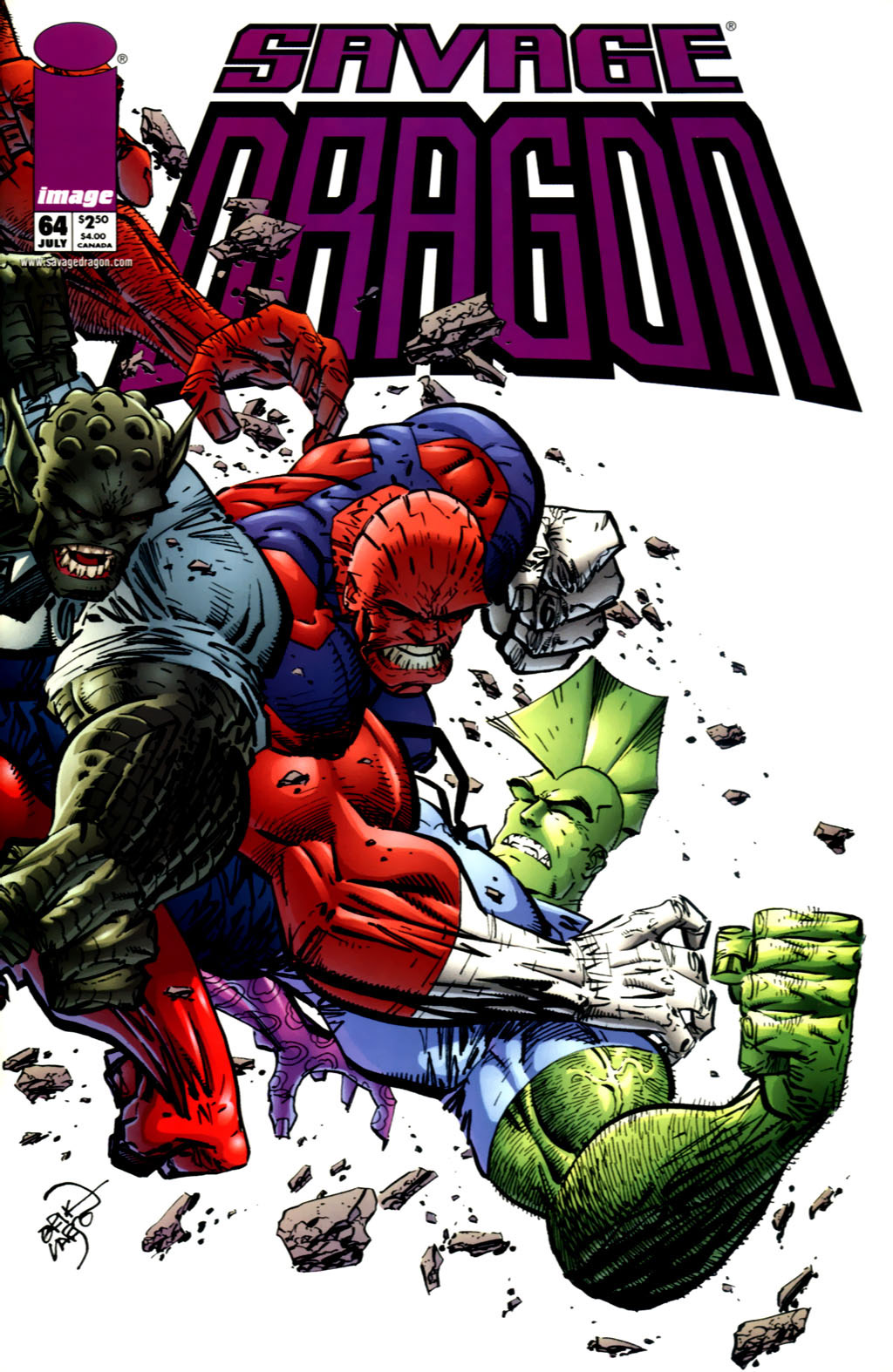 Frank Darling and Bill Ford stop by to visit with Dragon following the funeral service of Vic Nixon and reveal that it was probably for the best that he did not attend. Nixon’s family are understandably upset and Dragon having vowed to kill OverLord in public meant that there was some discussion of Dragon facing criminal charges. Frank believes that given the circumstances that nothing will happen but advises Dragon to be careful with his actions for the foreseeable future.

A huge piece of machinery is employed to finally destroy the OverLord armor. There had been discussion about studying the equipment as potential new life form but it was ultimately decided that letting the armor continue to exist was too dangerous. The authorities could not take the chance that it becomes active once more and increase its body count and so it is utterly destroyed.

The army of shrunken Vicious Circle members attempt to sneak into Dragon’s apartment by walking right underneath the front door. HellRazor plans to slit open the throat of Dragon while he sleeps as DownLoad leads his comrades towards the bedroom. Dragon surprises the villains as he had installed a security device to prepare him for such an attack. He uses an industrial strength vacuum cleaner to suck up the Vicious Circle whom he then throws outside into the trash.

Dragon shoots a commercial for razors and is filmed punching a super-freak named Randy Ruthless before delivering a line of dialogue. This is all watched by Chester Droars who had been invited to the studio by Dragon so that they could go out for lunch to catch up. Chester is shocked to learn that Dragon is now a father to Angel Murphy and that he has quit as a superhero. He is now trying to raise his child away from his previous violent life by accepting numerous media bookings.

The commercial’s assistant director, Marcy Howard, declares that the footage that had been shot was terrible and that Dragon would need to do multiple takes to get a perfect outcome. Dragon accepts this feedback straight away and apologises, something that Marcy had not been expecting. She then approaches Randy Ruthless with the new plan to film around a dozen takes of the commercial. The prospect of receiving so many punches is too much for the super-freak and he abruptly runs away.

The director completely undermines his assistant by raving about Dragon’s performance, leading to the hero offering to take Marcy out for lunch to make up for it. Chester correctly guesses that Dragon is going to leave him babysitting Angel despite being asked to lunch first. Chester is left with Angel as Dragon takes Marcy to a nearby restaurant. They are noticed by Bud Ugly who is working there as a busboy and he attacks Dragon, hitting him with an entire stove. Dragon shrugs off this assault and simply demands money to pay for his ruined shirt.

Marcy is overwhelmed by this incident but is assured by Dragon that is life is slowly calming down since he retired. She reveals that her father was a police officer and was killed in the line of duty which devastated her mother. Marcy does not wish to start a relationship that may end the same way as her parents’ but Dragon promises that he is done with crime-fighting. He cannot risk Angel’s life or leaving her to be raised without a parent and is truly done with his previous career.

Dragon takes Marcy to the movies with Angel and they pass the memorial statue that had been erected in his memory when he was believed dead. It barely resembles Dragon, instead looking like the Incredible Hulk with a fin on his head. Some time later, Dragon is waiting in line in a grocery store when She-Dragon fights a monster nearby. She ends up winning the fight but states that she could have done with some assistance but Dragon was unwilling to lose his place in line.

Whilst Dragon was collecting a babysitter, Marcy takes care of Angel and looks through a photo album and is amazed by Smasher’s appearance. She makes a joke about Smasher’s breast size which ends up upsetting Angel a little bit. Dragon then returns with Horridus to watch over his daughter, the sight of the heroine alarming Marcy. She realises that Dragon’s life is far different from her own and that the majority of the people in his life are super-freaks of some kind. Dragon and Marcy’s relationship moves onto the next level and Angel ends up catching them in bed together.

The Possessor’s mind has returned to his original body which has been mutated greatly due to the radiation treatment he received whilst incarcerated in Stronghold Penitentiary. His life had been saved by Dr. Plucker’s medical skills and the doctor is thanked. The Possessor then states that he detects evil within Dr. Plucker and uses his telepathy to have the man slash his own throat open. The Possessor then announces to himself that he can sense evil everywhere and wishes to deal with this threat…