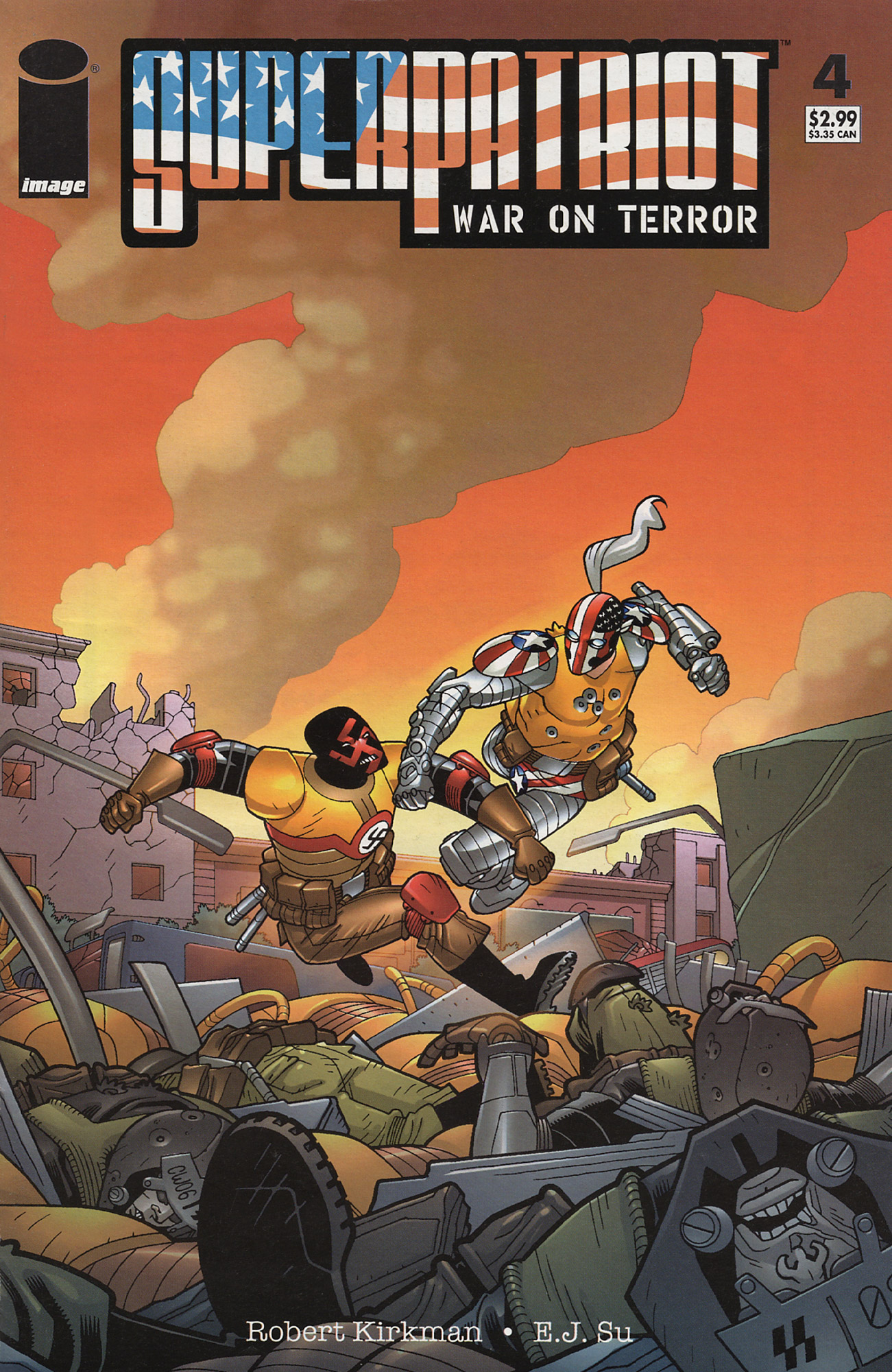 SuperPatriot is furious that innocent people have been killed for no apparent reason but Baron Blitzkrieg is convinced that the fact they angered him was enough. The villain is looking forward to this final showdown but he receives a powerful punch in the opening salvo that leaves him bleeding. He shrugs off this pain and opens fire which leads to a duel between the two old enemies. Blitzkrieg uses any weapon he can find amongst the corpses of his army in an attempt to hold his own.
This final battle fills Baron Blitzkrieg with joy and he confesses that as long as one of them dies then he does not even have a preference who survives. SuperPatriot knows that he would rather he be the one that lives and he begins to tear his opponent’s robotic armor apart. One of his own mechanical arms is ripped off as payback before the men get locked in hand-to-hand combat. After a long fight, both men are left exhausted and they collapse unconscious.

Claire Bono is at the bedside of her husband when he awakens almost two days after the fight in Hillman Hospital. Jake Farrell informs SuperPatriot that the government have carried out repairs to his cybernetic limbs before he excuses himself so that the couple can have some time alone. Claire then announces that she is pregnant with his child and they celebrate.

Nine months later, SuperPatriot is locked in battle against the super-freak Roughneck and they fall from the top of a skyscraper. As they plummet towards the ground SuperPatriot receives a phone call to inform him that Claire has started her contractions and will soon be giving birth. He leaves Roughneck to strike the ground as he uses his grappling hook to swing off towards the hospital. After nineteen hours the birth is finally completed.

An exhausted Claire is congratulated by SuperPatriot before their twin children are brought in for their first visit with their parents. Claire has an idea for names but is not sure that her husband will like it, suggesting that they name the babies after his late children, Liberty & Justice. SuperPatriot agrees and thinks that his fallen kids would like that their names have been passed on. He then receives a call to assist the authorities and heads off into action.

Meanwhile in Stronghold Penitentiary, one of the guards vows to make life for Baron Blitzkrieg a living hell for the duration of his incarceration. He mocks the prisoner that he cannot be put in with the other inmates as he is helpless and could not defend himself against them. As the guard wanders off, Blitzkrieg is disturbed by the wall of cell beginning to fall apart. Hitler’s Brain emerges from the hole and offers his former ally the chance to escape and work together once more. With few other options, Baron Blitzkrieg agrees to regain his freedom.