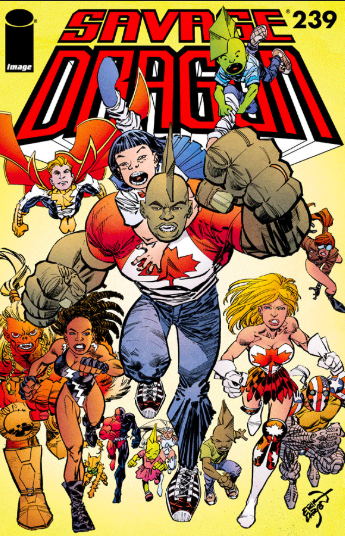 Malcolm surprises Maxine by showing her that his lower half has mostly grown back since his devastating fight with the Scourge. She makes fun of him over his still under-sized genitals and points out that they cannot have sex again yet as his vasectomy has been reversed with the regeneration. She instead opts to find other ways to satisfy her husband and gives him oral sex.

The media continues to hound Battle Girl over her recent seeming miracle restoration. She takes the opportunity to again claim that it was only because of her superhuman powers that she was able to fend off the explosive effects of the  “Chosen One” Krylan blood. Her warning to the world is ignored by the Norm Speigelman, one of the developers of the Perfect Women™ robots, as he injects Jack Dragon’s stolen “Chosen One” blood into his own crippled body. He is transformed into a Chosen One and departs to seek revenge upon Malcolm for intervening in his schemes via his defeat of his minions.

Toronto’s criminal underworld meet to discuss the emergence of the Scourge and vow to not allow what happened in Chicago between OverLord and the mob to happen there. Unfortunately for them, the ringleader of this alliance, Walter Tarantino, is confronted by Scourge. He is killed and the rest of the criminals are quick to pledge their allegiance to Scourge as he seizes power of the criminal element of the city.

The transformed Norm Spiegelman bursts into the bedroom of Malcolm and Maxine and attacks them, easily overpowering the still healing Malcolm. A terrified Maxine pleads for her husband to recover and strike their assailant down. As Malcolm strikes at Norm, the stolen Chosen One blood causes him to explode all of the place. The skirmish had awoken the kids from their sleep but they are ushered back to bed so that the long clean-up could begin.

As time passes, a huge army of Demonoids abduct, torture, rape and ultimately massacre a number of Toronto natives from the city above their domain. Their leader, Basilisk, determines that Malcolm is the only protector of Toronto and that it is ripe for their full scale invasion to commence.

Malcolm discovers the full details of Maxine’s actions at the bachelorette party when four different videos go viral on the internet. He is upset and angry with Maxine and the couple argue about recent events, particularly Maxine’s inappropriate actions. Walden Wang contacts Malcolm and convinces the reluctant hero to appear on the newly returned Harry Paratestees Television Show after he is promised that Maxine’s videos will not be mentioned.

With Maxine, the Dragon children, Battle Girl, Daredevil, Thunder-Head’s family, and members of Freak Force waiting backstage in the greenroom, Malcolm begins his interview with Harry Paratestees. The interview starts up innocently enough as other events are discussed but then the three strippers from the bachelorette party are brought out as surprise guests. Malcolm is enraged and walks off the show but is pursued by Harry and his camera crew. It is then that the Demonoids launch their invasion and immediately begin slaughtering everyone they come across. Malcolm seems to ignore Harry’s pleas for help as he leaps into action. The television show host, his crew, and the strippers are all massacred as the other heroes join the action. Malcolm hopes that his wife has made it to safety, unaware that she has been cornered in an alley by Basilisk…

LI’L DRAGON
The Boy Without A Birthday!
8 Pages & Back Cover