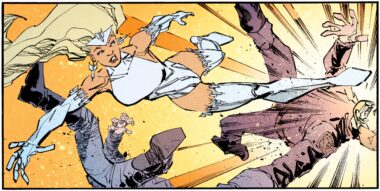 Jane August is the youngest sister of Jill August, the original Dart, and daughter of Sgt. Marvel. Heiress to the August fortune, Jane was kidnapped by the Battlin’ Bulldogs and held for ransom, but was saved by the new Freak Force, a group comprised of former members of the SOS. After discovering that she too possessed her older sister’s deadly aim, Jane assumed the Dart name and joined the new Freak Force, receiving training by SuperPatriot in hand-to-hand combat and weapons from her deceased older sister.