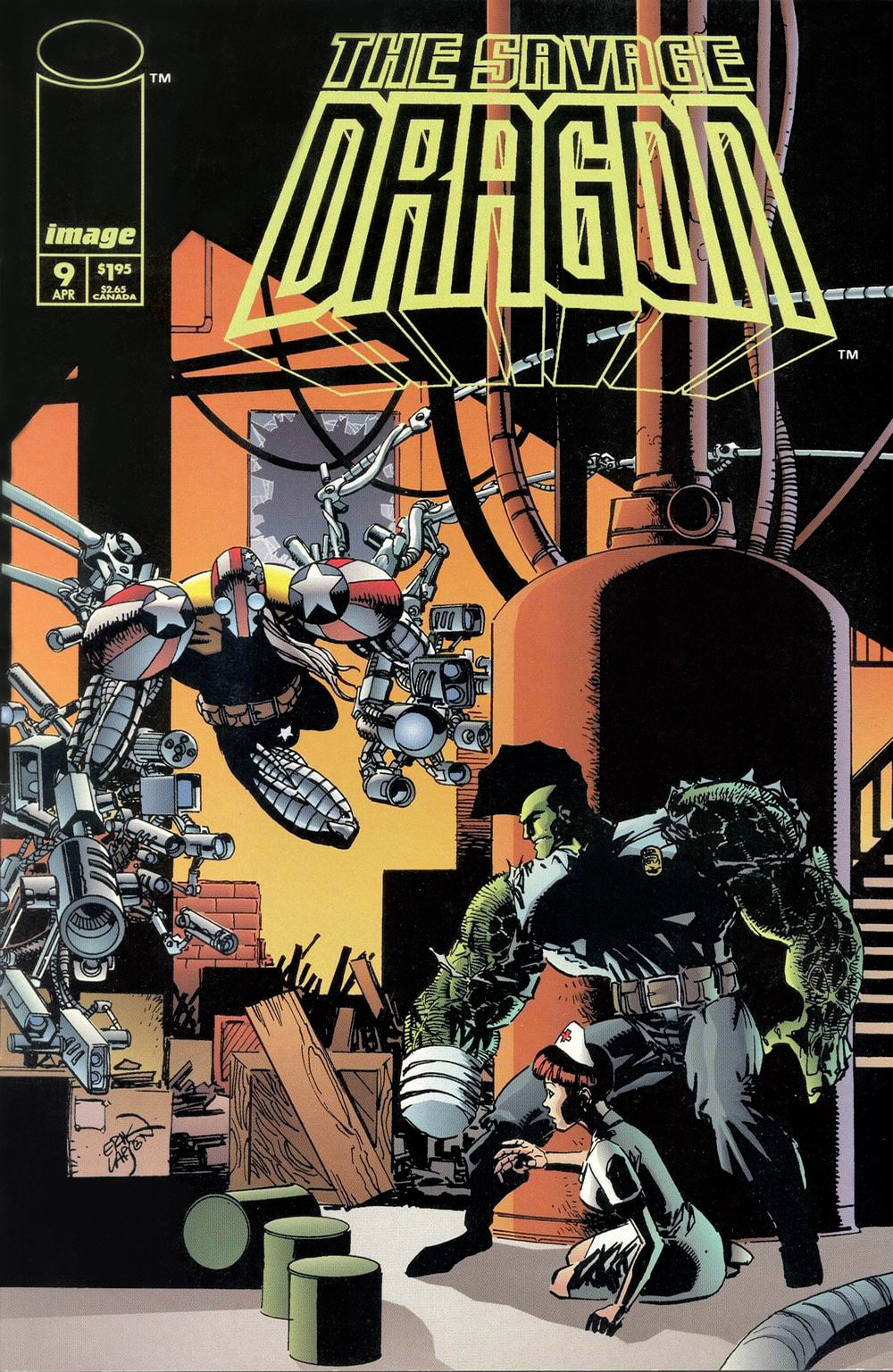 Dragon awakens in the apartment of Phyllis Deeder where he has been brought to recover from his injuries by Freak Force. They reasoned that there was more chance of him being unmolested in a building kept hidden from Dragon’s enemies. Ann Stevens is on hand to provide medical care and she updates Dragon on how his regeneration has gradually repaired everything except his hand.

This recovery is interrupted when SuperPatriot enters into the apartment and opens fire upon Dragon with his numerous weapons. He strikes down both Dart and Rapture which prompts Ann of all people to tackle the hero. SuperPatriot throws the nurse out of a window, causing Dragon to leap out afterwards and catching his friend and getting her down to the ground safely.

SuperPatriot pursues and continues his silent assault across the street and into the basement of another building. Ann Stevens offers to risk getting shot by going to run for help, her courage impressing Dragon as he goes to provide cover for Ann. Dragon strikes at SuperPatriot and appears to have rendered him unconscious but the veteran hero does not relent with his onslaught, maintaining his firing despite not even being awake.

Dragon does his best to leap out of harm and as he jumps over the head of his assailant he notices something is amiss. SuperPatriot has a leech attached to the back of his neck which is removed and crushed by Dragon. This creature’s death allows SuperPatriot to slowly regain his own mind but Dragon punches him once more to be sure. The rest of Freak Force burst onto the scene but by now the danger has passed and SuperPatriot has fully recovered.

This was the second time that Dragon has fought someone under the influence of the leeches and he means to get to the bottom of this mystery. Dragon thanks all of Freak Force for their efforts in giving him time to recover before informing Rapture that he owes her in particular for saving his life. She is pleased by this news but Dragon wishes to head home alone to get a proper rest.

Dragon returns to his precinct where his friends within the Chicago Police Department are ecstatic to have him safely back. Howard Niseman questions Dragon about whether or not he could identify OverLord out of the armor but gets a negative response. Dragon then learns that the Vicious Circle had gotten to CyberFace and eliminated him, causing all charges against OverLord to be dropped.

The Shrew is given his release after his trial found him to be innocent of the crimes that the leech forced him to commit. Howard Niseman is disgusted that the Shrew was set loose and warns him that if he ever steps out of line then he will be in deep trouble. Dragon apologises to the Shrew for their past encounters and suggests that he ignore the comments from his fellow officers. As the Shrew returns to the streets, he is confronted in an alleyway by the vigilante Mace who brutally beats him down.

Dragon finally settles down for a proper sleep in his own apartment but is awoken when Rapture sneaks into his home. She undresses quickly before getting into bed with Dragon but she is suddenly shocked by the sight of Dragon’s missing limb. Dragon is surprised himself as he realises that his right hand is in the process of growing back.