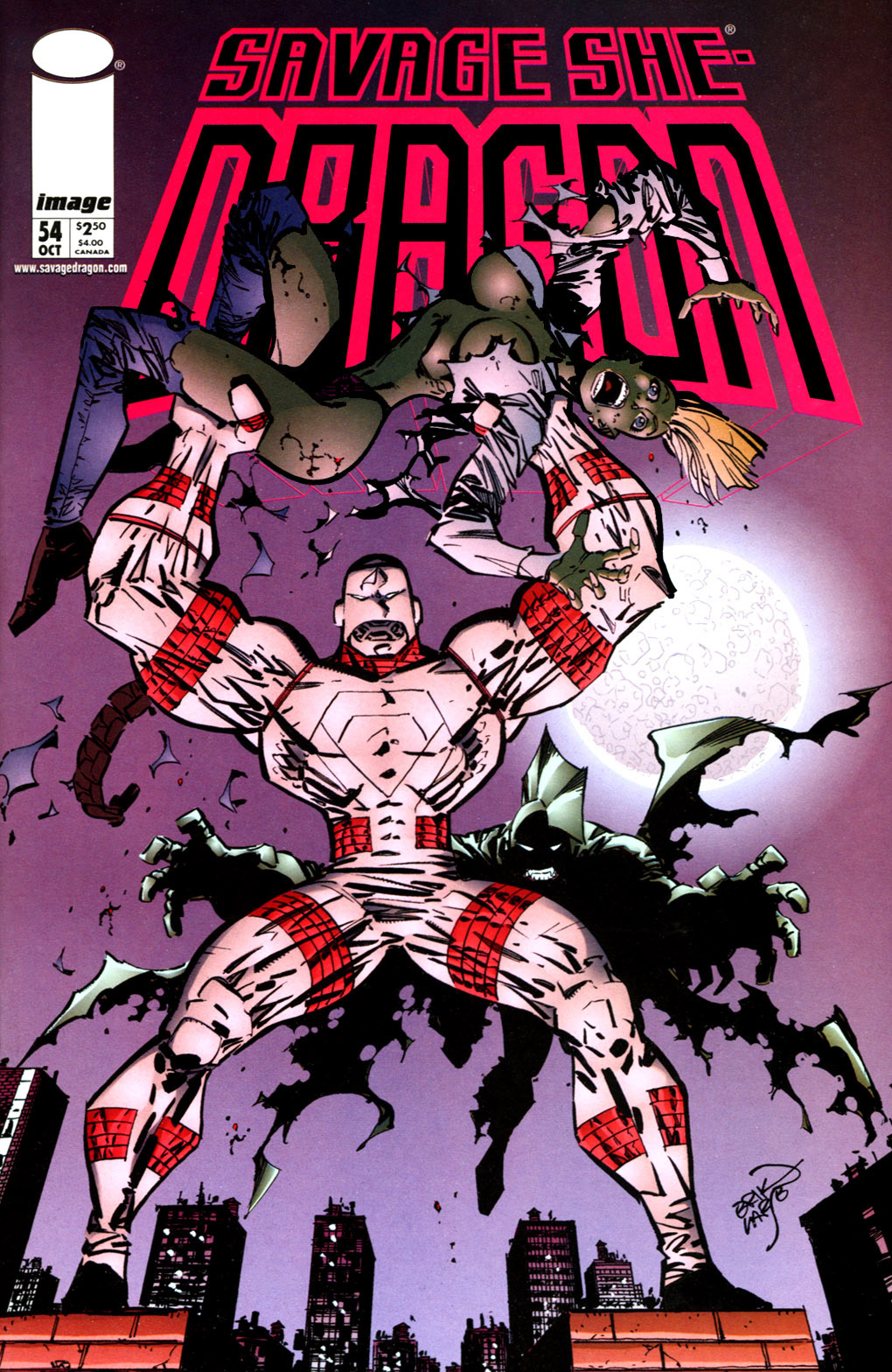 Minutes later, Kill-Cat claims that he touched nothing as Godworld begins to explode all around. The rescue party flee towards a portal back to Earth along with those super-freaks that had been abducted for having descended from the Gods. The explosions begin to catch up with the heroes and Radical is consumed by one of the blasts. The survivors make it through the portal and Rock screams for the portal to be closed, the gateway shuts down just before Godworld blows up completely.

She-Dragon explores the laboratory of Johnny Redbeard but comes under attack by EXROE-5, the robotic bodyguard to her late creator. William Jonson is gripped with pain as Dragon tells him that he is flexing his muscles, transforming William’s body into a form similar to his own which enables him to gain control of the body. He leaps out of a window and explains to William that he had heard a police radio that Rita Medermade had been listening to which mentioned She-Dragon being in trouble.

Rita had herself heard something that disturbed her, the gasps of pain that William had let out as his body went through its transformation. She breaks into the bathroom to find no trace of her fiancée and is unaware that spying on the whole thing is a new OverLord. He hovers silently above Rita’s apartment as she desperately calls out for William.

Back at Complex One, PowerHouse thanks the heroes present for ensuring his safe return to Earth but he has no intention of remaining in their company. The Kid Avenger attempts to stop him but he is thrown into the path of WarHawk. PowerHouse then bursts out of the building so that he may finally return to his own plans.

The fight between EXROE-5 and She-Dragon rages on with the robot destroying the very facility it was designed to protect in its effort to repel the intruder. She-Dragon takes the fight outside but is soon sent flying through the air, only to be caught by Dragon, wearing a ski mask to protect William’s identity. He joins the fight against EXROE-5 but She-Dragon has a plan and tricks their opponent into striking a generator that had been powering Redbeard’s laboratory, shorting out the building whilst also shutting down her robotic foe.

Zeus attends a meeting with his fellow Elder Gods where they discuss the recent events involving Godworld. He talks about the army that he dispatched to Earth and a debate takes place about what they will do with the former denizens of Godworld. They are unsure if they will open up their already overpopulated realms to these thousands of Gods but also discuss whether they should punish the mortals for their part in Godworld’s destruction.

Thor revels in the battle taking place as he strikes down Barbaric, demanding to know where Herakles is being held. Smasher points out that he does not care about his fellow God and is only taking part in this invasion due to the opportunity it presents him to rape and pillage. AllGod suddenly appears to end the conflict and informs the Gods that their home has been destroyed. It has been decreed that the vow of non-interference has been rescinded and that the Gods will now have Earth as their new home. The presence of these Gods will be the punishment for mortals.

Dragon takes his leave as Frank Darling and several other police officers arrive to help take EXROE-5 into custody. She-Dragon reveals that she was aided by a new masked vigilante, something that the city had not desired. Bludgeon watches on from afar, upset that She-Dragon had failed in her task to find a machine that could give him back a semblance of normal life.

After reverting back to his true form, William informs Dragon that should he hope to continue using his body to fight crime then a costume of some kind must be designed to protect his secret identity. He returns home in the hope of explaining to Rita what had happened. As William enters his apartment he is horrified to find signs of a struggle and that Rita is missing…