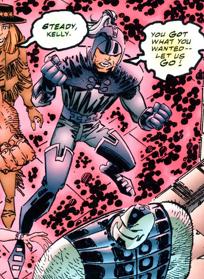 The Eternal Youths were targeted by the God Squad for life on Godworld but even though they were teleported to that world, they soon returned home thanks to the intervention of several of Earth’s heroes. One of the God Squad, Rakkum, had other loyalties, being a dedicated servant of DarkLord.

Rakkum abducted the Eternal Youths and created machinery that could combine their abilities and open a portal to parallel universes. Another DarkLord was brought over and allied himself with the Covenant of the Sword, seeking to conquer the planet through the use of a Nega-Bomb. The Eternal Youths were saved by Special Operations Strikeforce but this was not the last time they would be sought out by Rakkum.

Years later, Rakkum would join forces with the Monster Master and his Sky-Riders to once again capture the Eternal Youths. Their quest to bring over yet another DarkLord was foiled by Dragon and a whole host of heroes. Unfortunately, Charisma and two of his teammates were killed in the fight and the survivors would go to God Town to live.